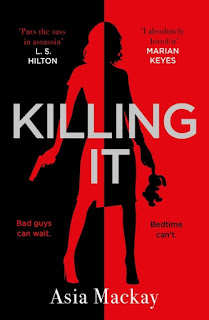 A debut novel, competently done with a fast paced flowing narrative. It could be seen as a satire about women returning to the work place after maternity leave, it could also be seen as an observation about certain sections of society and their parenting skills and nuances. Or you could just sit back and enjoy a jolly good female spy/assassin romp. And that’s what I decided to do. and on that level it’s a very enjoyable and entertaining read with some action and some humour some of which occasionally had me laughing out loud.

Lex Tyler works for Her Majesty’s Secret Service. She’s an assassin. She’s also a mum. And so she has to balance the two. It’s a convoluted, highly improbable plot! It has twists and turns aplenty. But I daren’t say too much more in case I spoil it!

It’s not a book that covers any new ground. Tye juxtaposition of spy and mother is a good one. Im not sure I’ve come across that before but as for the plot you’ll feel like you’ve read something similar. But it doesn’t matter. It’s engaging enough to satisfy a reader looking for a book to take on the commute or on holiday.