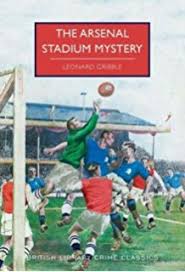 I had to keep this book out of sight from a dear friend who is a Spurs fan. So strong is her despite of Arsenal that she won’t allow red in her house! Trouble is I’ve known her for so long that some of that despite has, unreasonably, rubbed off on me so I was - almost - filled with horror when I received the book! But I am happy to report that unless my friend reads this review she will remain ignorant of my turncoat behaviour!

But in reality the football side of things was a sub issue to the main plot. And any affiliation to any football club is not compulsory. It’s almost misleading aside from the fact that it is possibly one of the first football based crime stories and, apparently, the name of the Arsenal players are the actual names of the players at the time including the actual secretary manager of the team at the time, George Allison. It’s an Inspector Slade mystery of which there are several. This is the only one I have read so far but I really enjoyed meeting him. As a mystery the solving is dependent on much brain work and less in the way of forensics but that is always a feature of these crime classics. I marvel at the grey matter somersaulting that goes on for everyone involved! Reader, writer and characters. It’s very much an unravelling as you work alongside Slade to figure out what’s going on, who’s telling the truth.

The basic premise is that an amateur team is playing Arsenal. One of the players from that team collapses on the pitch and dies before the day is out. Not really a spoiler, given that this is a Crime Classic to state that a murder investigation follows.

There’s a fair helping of suspense that may seem tame in comparison with today’s crime novels but I think it is essential to read these stories in context of the time in which they were written but also to consider the policing techniques and procedures of that time which differ vastly from today’s.

I thought the story was well plotted and the narrative was fast flowing without skimping on relevant and necessary detail. The characters are functional and believable if a tad stereotypical on occasions. The male characters seem to fare better than the female characters in terms of development and believability but maybe that’s an historical cultural thing.

If you grab a copy of this book, and I’m sure you will, there’s an interesting introduction from Martin Edwards which gives some information about a film that was made of the book.

Once again I offer my thanks to the grand folks at the British Library  who sent me a copy.