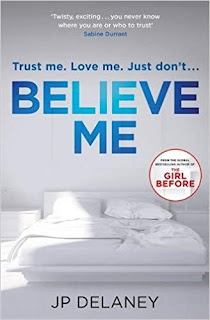 Oh, ho, ho , Mr. JP Delaney. This really shouldn’t be allowed you know. What have innocent readers ever done to you? Do we deserve to be hurled onto this roller coaster of a thriller and thrown from side to side as it twists and turns and races towards its conclusion? Yes we do, indeed we do and please don’t stop!!

I jumped at the chance of a copy of this book having thoroughly enjoyed The Girl before Me. and if I’m honest not expecting that it could be matched. But it can.Some familiar themes endure and I found some character similarities in the main protagonists. I’m not saying it’s formulaic, not at all, rather a feature of this writer’s characterisations. The two main characters are powerful and dominant. Convincing yet flawed. And you have no idea who is telling the truth and who isn’t. The drama theme is key as is the work of Baudelaire.

in a way, like its predecessor, reviewing is a challenge because you simply don’t want to give away anything. But briefly a struggling UK actress in the US without a green card takes whatever job she can including assisting a divorce lawyer to get evidence on potentially cheating husbands. Easy money? Maybe until one of the potentially cheating husbands becomes the subject of a homicide enquiry. Then all hell is let loose and I’m not going to tell you any more about the plot.

What I am going to tell you, though, is that this is a credit to its genre, a psychological thriller at its best. One that ties the reader in knots as to who is really who, who did what, who didn’t do what and who might do what!!! It’s tense, it’s intense, it’s suspense. Oh that Hitchcock were still with us and could film it!

Structurally interesting and I’ll admit to begin with I found it irritating where portions of the dialogue were rendered as play script until I ‘got it’. Got what? Oh no. If I’ve learnt one thing from Mr. Delaney it is not to give anything away! But the plot is tight, you might try to find a hole but I doubt you’ll succeed. There is an argument for it being convoluted but I sometimes think that’s a reader excuse for not reading carefully enough! And, believe me (!) it’s easily done here because you just don’t want to put the book down, you race on desperate to find out what happens. The way one thing turns on itself to reveal something unexpected is masterful.

Whilst covers never really do it for me, I read the book not the cover, I’ll make an exception here because of the colouring of the lettering which is a delightful use of word play. BELIEVE ME.

If you like the psychological thriller genre then ‘believe me’, you’ll love this.
Posted by Bookphace at 07:43