What happens in the village, stays in the village could well be the motto of the inhabitants of Milham in the Moor, a Devon village, where its unspoken law is ‘Never make trouble in the village.’ It reminded me of League of Gentleman’s Royston Vasey, ‘This is a local shop for local people.’ and that 60s TV series The Prisoner to a degree. 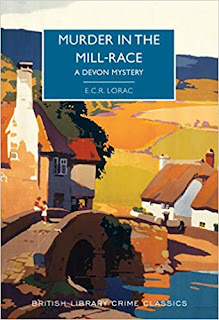 So what happens when newcomers move to the village in the shape of Dr. Raymond Ferens and his wife Anne? Well, it sure ain’t ‘Escape to the Country’! They’ve barely been there when a body is found floating in the mill race. The deceased is the warden of the local orphanage and when the local bobby flounders in his investigations of what is first viewed as an accidental death enter MacDonald of the Yard and D.I.Reeves. Those familiar with Lorac’s work will also be familiar with MacDonald’s work and his style of meticulous, detecting. I’ll confess I’ve come to love MacDonald. Lorac has sustained the characterisation though all of the books I’ve read and I enjoy the balance between objective, unemotional policeman and a man of humanity and understanding.

This story boasts a cast of characters who all seem, on the surface, to revere and admire the dead woman. However all is not as it seems and true feelings and revelations emerge as the investigation progresses. Clues there are a plenty, and with the absence of modern policing methods the amount of work and thinking form the meat of the book. There’s a pleasing juxtaposition of the perceived idyll of village life that the Ferens think they might have found with a darker, uninvited  hypocrisy that binds some of the villagers.

The plot is intricate and well constructed. It's ingenious too. NO second guessing here. Much time is given to the details of the crime and its execution and form the conclusion of the book. To reach that conclusion people are forced to lay themselves bare to the police and confront their own selves to a certain extent.

I’ve read several of Lorac’s books now, all  thanks to The British Library and there’s not one I haven’t enjoyed. Whilst the emphasis is on the story telling there is often a subtle, understated comment of some kind. Here it seems to be a sense of village versus city life and the explosion of preconceived notions as myths.

As ever, Martin Edward’s introduction is almost as much a pleasure as the novel!!
Posted by Bookphace at 11:26