If I’m truthful I’ve been delaying reading this book for months. Why the reluctance, I hear you ask?! Because I knew I’d love it and I knew that once I’d read and finished it I’d no longer have it to read, if that makes sense? I wanted to hold on to that delightful sense of anticipation that I get from Ms. Fremantle’s books. Ever since Queen’s Gambit I’ve been a fan. I’m not sure if it’s because she writes so vibrantly about one of my favourite periods in history or that she’s exceptionally good at writing historical fiction. I suspect it’s a little of both! But when I realised the paperback edition has just been published it seemed timely. 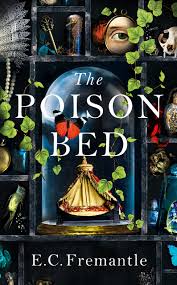 One of the marks of a good historical fiction for me is where you go scuttling off to research the main characters. Barely had I closed the cover than I was googling Frances Howard, Robert Carr, and Thomas Overbury, hungry for more knowledge. We think we live in an age of subterfuge, corruption and false news but when I read of the Tudor/Stuart/Jacobean antics I wonder whether if anything has really changed?!

Another mark of good historical fiction, in my opinion, is the depth and quality of the research. And if that sounds like stating the obvious it’s how a writer utilises that research to construct a narrative that envelopes the reader, transporting them back to that age with such convincing detail that you can see, smell and hear the era.  It’s only when you sit back and reflect objectively that your jaw drops when you realise the extent of that meticulous research.

The structure of this novel is simple; a dual narrative, ‘Him’ and ‘Her’ with the ‘Her’ divided into a third person story telling and a first person confessional type account. Initially, you think why? But as you progress through the novel it hits you and you realise how damn clever it is!

Something that really stood out for me was the author’s understanding of character; how to develop, not just the character but through that development manipulating the readers’ response, both cerebrally and emotionally, and then turning it all around on a sixpence. Masterful. But far from the poor reader feeling duped you’re drawn in deeper and deeper marvelling at how such deception could have taken place and fooled you. So satisfying to read.

Court etiquette, social conventions, loves that shall not speak their names, political ambition, nature and nurture, friendship, loyalty, this book has the lot and more besides and I am bereft that I’ve finished it. It’s one thing to write good historical fiction, our bookish world isn’t short of it, good historical fiction that entertains and informs us of ages other than our own but it’s another to take historical facts and weave them into something akin to a contemporary psychological thriller! Gone Girl? Go girl!

I’m one of the first to affirm that I read a book and not its cover. But I was reading this book on public transport (I really couldn’t put it down!) an d someone approached me saying how fantastic the book I was reading looked! So with much enthusiasm I proceeded to wax lyrical about the book, its author and her other works. Cover Power!

I’ve said very little about what actually happens in the story, have I? Ooops! Best you go read it for yourselves…….