In this homage to the silent silver screen Dominic Smith has fused a detailed factual history of early cinema with a love story and a war story that spans several decades and several countries. It’s a must for the movie buffs as Smith lovingly depicts the passion with which early filmmakers honed their craft and the stumbling blocks that impeded their progress. Who knew Edison insisted on such a monopoly of this new, moving picture craze?! 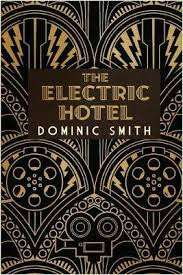 Moving effectively from present to past Claude Ballard is our main protagonist, aged as the story begins, but still with a zeal for capturing the world through his lenses. He is approached by film graduate student, Martin Embry, interested in Claude’s career. The two strike up an harmonious understanding and Martin offers to restore some of the ancient reels of film.

This proves to be the catalyst for the unleashing of Claude’s memories and the bulk of the book goes into intricate detail of Claude’s progress from humble beginnings as a photographic apprentice at an asylum where he photographed still shots of the inmates’ behaviour to silent film cinematographer, whose crowning masterpiece, The Electric Hotel, was vetoed by an influential competitor causing bankruptcy, to war photographer. I’m risking giving too much away if I continue so I’ll stop right here!!

Interspersed with the cinema story is a love story, bittersweet, but offering a welcome human element that works in parallel with the film story. It illustrates the dedication to creativity  and the effect that creativity may have on personal lives.

It’s a work of historical fiction, painstaking research must have gone into the writing, particularly of the cinema history . It’s also a love story on several levels. The love and passion for the dramatic and cinematic arts and romantic love that may or may not run smoothly and a wider love of humanity.

I did struggle to get into the book initially. I’m not sure exactly why but fortunately I seldom give up on a book and I found myself becoming more and more absorbed as the book progressed. It’s a dedicated and authentic recreation of a time gone by, without resorting to superficial nostalgia to harness the reader.

My thanks to Nudge Books for this copy.