I’m generally suspicious of hype and over hype but this book somehow ingratiated itself onto my bookish radar to the extent that I couldn’t hold out any longer and I bought myself a copy.  An award winning debut novel, a serialised reading on Radio 4 and a cover to intrigue has to have some considerable merit, hasn’t it? 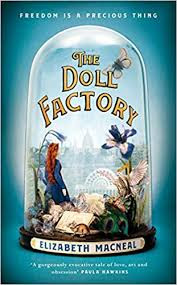 Set in 1850’s Victorian London with an atmosphere that reminded me of Sarah Waters,  little of Jessie Burton and Victor Hugo’s Les Miserables for starters, it creates a palpable picture of extremes from poverty and prostitution to affluence and art. You can try and label it as history fiction, gothic fiction, romantic fiction, a psychological thriller et al and I guess they all fit but when all is said and done it’s a story and it rises above compartmentalising. Thematically I guess obsession rules, followed by a consideration of the female aspiring to be an artist in a male dominated world. I’m worried about offering spoilers but I get the feeling that I’m possibly one of the last people to have read this book?!

The characterisations are vivid and the main characters step off the page at you. That’s not to say the lesser characters are in any way ‘lesser’ in terms of the fiction but the main players do dominate. Iris Whittle and her twin sister Rose, quite the bouquet, although Rose has suffered some disfigurement due to smallpox, work a soulless existence in Mrs. Salter’s Doll Emporium.  Iris aspires to more, and a chance meeting with an artist, Louis Frost, is the catalyst to further those aspirations. Frost is a member of the PRB and, no, this has nothing to do with Line of Duty (!), it’s the acronym of the Pre Raphaelite Brotherhood. Silas Reed is a disturbed individual who earns a crust as a taxidermist often furnished with specimens ‘caught’ by Albie the ubiquitous Victorian urchin who offers more than a passing nod to the Artful Dodger and is the link between Iris and Silas. In turn Silas provides artefacts for the PRB. It all dovetails in quite nicely and prepares the way for the spinning plates to spiral out of control. Even if I am the last person on earth to read this book I still can’t bring myself to ‘do spoilers’ so that’s all I’m saying!

It’s a very readable book with plenty of suspense and tensions that have you turning the pages. The romancey bits were weaker in comparison, in particular some of the dialogue, or that might be me not doing the romantic lit thing. But that didn’t detract from the story as a whole. It was authentic and easy for the reader to become immersed in the contrasting environments; The Royal Academy and the Great Exhibition in Hyde Park, other areas of London, Regent Street and the Strand, beautifully realised in descriptive passages. The research was competent and the detail enveloped the reader. The parallel stories offer a wider appeal than had the author confined herself to the ‘mere’ thriller aspect or romance aspect.  I found the art sections of particular interest and the interaction between the painters at times offered some light relief. For the book is dark and unyielding at times. Have a tissue handy!

This is an auspicious debut. I’m delighted I ‘gave in’ and bought the book. I thoroughly enjoyed it!