Just a one word title and the very word conjures a plethora of images, Biblical and otherwise. I found this story of Charles Lambert reminiscent of some of Patrick Gale’s work, initially. Published last year this novel has been long listed for the Polari Prize 2019. The Polari Prize seeks to 'honour writers whose work explores the LGBT experience, whether in poetry, prose, fiction, or nonfiction.' 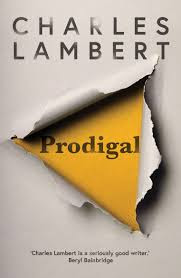 It’s the story of one man, yes, but it is also the story of his family, his place in that family and the dynamic of that family even when they are fragmented. It examines all the different relationships in their complexities and hint at how far nurture may go to shape the people we become or not become as the case may be.

We see things primarily from Jeremy’s perspective but his sister, Rachel, has her story to tell as well. Both brother and sister are flawed people floundering in their relationships with themselves, with others and each other. There’s a bittersweet dynamic to their relationship. And if this all sounds as if the book is too dark there is some wit running through. For example, Rachel’s culinary response to Jeremy’s homecoming is from M&S because, as she says with allusion to the title, ‘I’m afraid we’re out of fatted calves.’ That had me chuckling.

Lambert is a perceptive observer of humankind and he hits the nail on the head more than once creating situations that are awkward, uncomfortable and yet many of us have been there and wished the ground would swallow us up. It’s emotionally raw and brutally honest.

Structurally the novel is divided into four parts, beginning and ending in 2012 with two sections taking place in 1977 and 1985 detailing pertinent events that in simplest terms look at the breakdown of a family. What I think Lambert has done very cleverly is to show the complexities and absurdities of such dysfunction but in a way that is comprehensible, paradoxical as that may seem. He doesn’t offer the reader finite conclusions, but rather suggestions as to the nature of this fine mess they’ve gotten into. But if you pare it down to basics their fundamental arguments against each other remain the same throughout  the book and then you’re left asking whether its nature or nurture that has caused their fraternal unrest. There’s a cyclical effect to it all, almost oppressive as the siblings go back and forth in a seeming stalemate of unresolved resentment.

However downlifting that may seem the book concludes with an element of optimism but it isn’t, on the whole, an uplifting book. It does offer us an interesting portrayal of family life and one man's attempt to deal with who he is and how he became.

My thanks to Gallic press for a copy of this book.
Posted by Bookphace at 10:16