Another one that slipped thought the net. I received a copy of Fiona Kidman's latest book This Mortal Boy to read and review. I hadn't thought of Songs from the Violet Cafe in a while but unsurprisingly I was reminded of it and I searched the blog to read what I'd written and  - it wasn't there!! Hence a retro review. Just wondering how many other 'lost' reviews I have skulking around my hard drive! It's spooky too as a tentative title for my WIP is Cafe Society. I always take notice of strange forces at work.

This book was originally published in 2003. What the thinking is behind republishing and remarketing it I am not sure. But it did mean I was able to secure a second hand copy at a reasonable price instead of having to endure it as an e-book which I loathe!! Fiona Kidman is a celebrated New Zealand author who I have not encountered before. 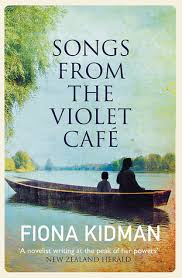 Firstly I enjoyed it very much. The title alone conjured up a multitude of past ‘Cafe’ experiences that I hold dear - Bagdad Cafe, Fried Green Tomatoes at The Whistle Stop Cafe and The Ballad of the Sad Cafe. (In fact another Carson McCullers novel The Heart is a Lonely Hunter was also brought  to mind by some of the descriptions and action within the Violet Cafe itself.)

And so with a certain frisson of anticipation I settled into this book relatively easily and happily. The action takes place mostly in New Zealand but also reaches into the heart of Cambodia. Sitting here in leafy England I sometimes forget that Asia is almost no distance relatively from the Antipodes and I had to keep reminding myself of that to keep a perspective on the narrative.

Violet Trench is one of the main protagonists and obviously where the book and the cafe attain their title. She is a strong, autocratic woman and runs the cafe with a rod of iron. She employs a number of individuals, mostly women, who all have their own story. The cafe is the cement that binds them all together despite it crumbling in places. I guess their stories are the ‘songs’ of the title although there is some discordance among the melodic.

Whilst I really did enjoy the book I did find it a little disjointed. There was much switching between time frames and characters. I frequently had to refer back to remind myself who was who and when was when. (Another plus for reading the physical book. What a drag it is trying to do that with an ebook?!) It struck me several times that it was very much like reading several short stories with the cafe being the link between the characters whose stories were told. I think Ms.Kidman is very comfortable with the short story format as she has had several volumes published. And maybe I am making that sound like a criticism? Forgive me, I don’t mean to.

The writing is accomplished, economic without being sparse. There is no overload of description but all that needs to be conveyed is done so with eloquence. The characters are a troubled bunch on the whole; some are difficult to warm to but I found myself engaged with them and keen to follow their histories. Violet herself seems to place everyone at arms length including the reader and in contrast Jessie draws us towards her.

This isn’t merely a discourse on the lives of a cafe owner and her employees, the net is cast wider than that with some food for thought of what happens to a country in conflict with itself and people in conflict with themselves.

It will be interesting to see if republication propels the novel into a wider realm.