A Grave for Two - Anne Holt

I have a couple of Anne Holt books on my TBR shelves but because I prioritise review and advance copies first,  there they sit patiently waiting.  Thus I was absolutely delighted to get my greedy little hands on this latest offering from the doyenne of Nordic crime. Thank you so much, Readers First.

You'll need every ounce of your critical, rational abilities to keep up with this labyrinthine plot. It weaves and wavers its way though the impossible, the implausible but the absolutely readable as the strands and layers are unravelled and revealed bit by glorious bit. 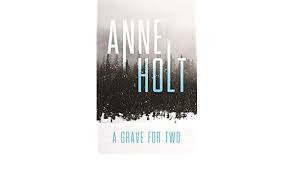 A good crime plot renders itself difficult to summarise for two main reasons, firstly to do so risks way too many spoilers, secondly the complexities make for an unbalanced précis. So let me just throw a few key words at you ? Skiing, gambling, doping, murder, sabotage, revenge, grief, homeless......... For starters!

The reader becomes a ping pong ball almost initially as you're batted from character to character, location to location and you need to pay attention for Holt doesn't waste time or words. And you won't want to back track to check on something you think you might have missed earlier so eager will you be to read on and on. There's lots of relevant characterisations, don't be fooled by a seeming lesser character, they all have a role to fulfil.

Selma Falck our key player has lead a less than exemplary life but second chances should always be offered and they are here by a less than exemplary character, Jan Morell whose daughter finds herself in hot water. More than that I'll not say. Selma's investigation and thought processes include the reader to the extent that you almost believe they are your own thoughts and deductions. But they're not. I doubt you could second guess this.

As always Holt tells a story with some subtle, implicit almost, social commentary alongside a smattering of legalese and police procedural. But the emphasis is the story and  the plot, a multi narrative all consummately translated by Anne Bruce so the prose flows easily and convincingly.

If you're a fan of Anne Holt you've probably already pre ordered this, if you're not but you enjoy crime, Scandi crime this is as good a place as any to start.
Posted by Bookphace at 12:12