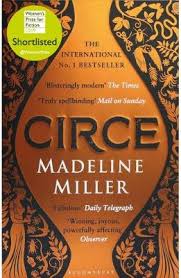 There seems to be an abundance of Greek themed fiction around currently. I’m thinking of Pat Barker with The Silence of the Girls and Natalie Haynes with A Thousand Ships, both on my TBR list. But no one could accuse Madeleine Miller of jumping on the bandwagon since her first book was The Song of Achilles!

I remember learning about Greek Myths and Legends when I was still at Junior School. I found them fascinating and quite addictive. As a child I believed in them completely. As an adult I marvel at a culture that produced such tales - magical realism or allegorical morality? Today they offer an imaginative opportunity for the modern novelist to explore contemporary themes within the framework of an ancient tale.

In Circe Ms Miller has used the basic Circe legend, the witch goddess who turned Odysseus's’ men into swine, to explore themes of feminist independence and solitude. Ofttimes I wondered if Circe was simply a victim of bad  PR and familial misunderstanding. Miller’s Circe is a strong, resourceful and compassionate woman, conditional compassion, for beware if you cross her! The famed porcine transformations arose out of Circe’s need to protect herself from the exploitations of her hospitality by nautical nomads! Of course familiarity with the Greek Legends are inbuilt spoilers to a degree!! I did wonder what readers who have not explored the stories of the Gods and the Heroes make of this tale!
I loved, maybe that is not quite the word, the retelling of the Minotaur tale.

Now having read the book it is no surprise that it has been shortlisted for the Womens’ Fiction Prize 2019. The femininity and humanity of Circe is what drives the novel along for me. Her early compassion for the plight of Prometheus gives us a clue. And what follows does little to dispel that. The dignity with which Circe embraces her isolation and her wisdom in understanding that state  is uplifting .

‘But in a solitary life, there are rare moments when one another soul dips near yours, as stars once a year brush the earth.’ - on her relationship with Daedalus.

The prose is expansive and flowing, creating a palpable atmosphere of Circe’s life on her island. There’s something alluring about it and I found myself wishing I could live there ! Swapping herbs and potions for books and writings of course, no sorceress  am I !! Some memorable images -

The relationship between Circe and Odysseus is fascinating and sustained. One of the advantages of using ancient stories and characters to propel your fictional ideas forward is that the characters are already in our consciousness but the writer can do with them what they will. Our preconceptions of Odysseus as something of a thinking man are not unfounded. And famed, patient wife Penelope is another feminist force within the book. Penelope is almost a mortal doppleganger of Circe! Odysseus confides to Circe his awe for Penenlope's sagacity.

‘I asked her how she did it once, how she understood the world so clearly. She told me that it was a matter of keeping very still and showing no emotions, leaving room for others to reveal themselves.’

The book explores Circe’s relationships with men for the most part but the passages that look at her interaction with Penelope hints of sisterhood and female understanding.

The conclusion of the book offers some lyrical musings that are satisfying for the reader. You feel that throughout her long and eventful life Circe has found peace with herself.

‘The frogs had gone to the wallows, the salamanders slept in brown holes. The pool showed the moon’s half face, the pinpoints of stars, and all around, bending near, the wavering trees.’

A deeply satisfying book that can be enjoyed on several levels. Just enjoy it as a story if you want. Delve a little deeper into ideas of #metoo and what it is to be a woman. Immerse yourself in the writing.

This book was a birthday gift. I believe the Greek Gods and Goddesses celebrated their birthday monthly rather than annually! That would suit me for bookish gifts like this one!