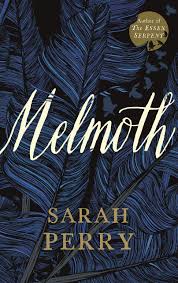 Thought association, word association - I see Melmoth and I think 'behemoth' . And I fear all manner of monsters.  Late to the party with this book, I know, but I will plunder my cliche closet and assert that some things are worth waiting for and better late than never.

Sarah Perry has put the 'Go' back into 'Gothic' with the mighty Melmoth. Our conscience and guilt personified in the shadowy 'lonesome traveller' Melmoth, Melmat, Melmotte,or Melmotka, a rose by any other name would smell as sinister. I could almost guarantee after reading, this book will have you nervously glancing over your shoulder more frequently than you could possibly imagine. The dark antithesis to the more optimistic Guardian angel of our 'spiritually enlightened times', Melmoth doesn't just sit upon our shoulder, Melmoth pervades our entire being punctuating our every decision with considerations of conscience.

It might be deemed folly to ignore Charles Maturin. But I will! This is a female Melmoth and there is no selling of souls for longer lives. This modern day take is more subtle with a wider reach. The novel's structure perhaps owes more to Maturin than the theme, after all, souls have been sold to the devil before, but a Matroyshka of tales nestling together inhabit both books.

'Twenty years ago Helen Franklin did something she cannot forgive herself for, and she has spent every day since barricading herself against its memory. But her sheltered life is about to change.
A strange manuscript has come into her possession. It is filled with testimonies from the darkest chapters of human history, which all record sightings of a tall, silent woman in black, with unblinking eyes and bleeding feet: Melmoth, the loneliest being in the world. Condemned to walk the Earth forever, she tries to beguile the guilty and lure them away for a lifetime wandering alongside her.
Everyone that Melmoth seeks out must make a choice: to live with what they've done, or be led into the darkness. Helen can't stop reading, or shake the feeling that someone is watching her. As her past finally catches up with her, she too must choose which path to take.


Exquisitely written, and gripping until the very last page, this is a masterpiece of moral complexity, asking us profound questions about mercy, redemption, and how to make the best of our conflicted world.'

The images support and confound the reader. Set in Prague where jackdaws seem to roam as pigeons do in London, (Isn't the Czech for 'jackdaw' 'Kafka'? And Kafka was a native of Prague. (Why do I feel such potent significance in this?  ) The distinction between the modern day city and the past times described are blurred, indefinable almost. Reading the restaurant section for Albina's birthday celebrations where the four women are divulging their guilty secrets I had to keep reminding myself that this was contemporary Prague instead of a timeless gothic Prague with its stepped gables and minarets.

The characters, flawed and deceptive, posing on some levels as Everyman, Helen, so disturbingly ordinary, 'What danger can come to a woman in such very sensible shoes?' and others as hyperkinetic, Albina so distressingly in your face, or Helen's mostly. They all are guilty of some act of immorality, selfishness, cruelty, violence even, and all are painfully aware of their transgressions without necessarily, initially, to be accountable for them. No gender barriers, here the men are as guilty as the women. From Everyman to Nameless, the moniker for the last character in the concluding guilty story in the book, none shall escape. Apart from Adaya? Is she to be the bastion of goodness held up to emphasise the immorality of rest of the cast? Or is that too convenient, too comfortable for a book that cross shreds comfort?

All these separate stories woven into this consummate piece of storytelling explores the darker side of us all. Is this Original Sin laid bare? Is Judgement Day here on earth, with us now? The strength in part is how Perry urges us to examine, not just outright perpetrations of the wrong and the immoral, but the part played the ‘innocent bystander’ and their responsibility. So, is this ultimately a moral tale? Cause and effect? A conscience for a conscience. Is it obliquely karmic? Karel ultimately, for all his initial cowardice, redeems himself by fighting for what is right, and alone among his Melmothian mates seems to emerge unscathed.


If the novel loses its gothic way part way through, it never loses sight of the tale it divulges and its gothic promise returns and redeems itself as the cyclical conclusion of the story returns the innocent reader back where they started from. But not quite, for Melmoth emerges from the shadows to address us personally.

Perry's prose flows smoothly and expansively. The various narrative devices, add variety and textures to novel as a whole. The characters are quirky, faulty with an implicit frailty in many cases. The descriptions are rich and atmospheric. The metaphysics  offer the reader much to ponder. As with many substantial works there is much in the book that touches upon aspects of the human condition and I found many quote worthy maxims.

'The battle of the mind is the war which can never be won.'

I am the one survivor of a wrecked ship, adrift on a tideless sea!'

My sons, beware the pride of nations. There were those whose land this was before your ancestors were born, and there will be those who claim it when your name has passed from memory. A bird may as well make its nest in the tree and say: no other bird shall nest here for these branches of mine alone.

' I sometimes think that one great emotion is never very far from all the other ones. Best to avoid them entirely, if possible.'

'The ant does not complain when it's next is destroyed, and we were no more than that.'

What I enjoyed, too, was witnessing how a writer develops and progresses. Sarah Perry has gone from strength to strength. When you get shivers in anticipation of a writer's next book you know you've found a good 'un.