Call Me A Liar - Colette McBeth 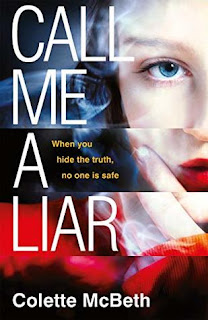 This is a dark psychological thriller that builds up into a crescendo of twists and turns that I doubt the majority of readers will second guess. It’s a multi narrative structure which is an interesting device as it also serves as a tool for character development. There were plot elements in it that reminded me briefly of both Donna Tartt’s Secret History with the concept of a group of friends or associates bonding with less than desirable results and Agatha Christie’s And Then There were None with a group of people seemingly marooned in one place.

It’s contemporary thematically and throws open very real considerations as to whether practices described in the book are possibly happening as we speak. It wouldn’t surprise me! I’m unwilling to give anything away so I’ll expand no further.

I found it to be a compelling read and I was keen to find out exactly what was going on and I imagine I was as surprised as the author intended me to be at some of the plot twists. Very clever. The opening is suitably ambiguous departing from the much used ‘Prologue” device, instead there’s a word definition, or definitions and the final summing up from a judge. And none of it means much to the innocent reader starting on this story! Oh, but just you wait!  All will be revealed. Eventually.

With a complex plot the reader needs to remain on their toes to absorb all the detail and information that is being given. And there is a lot of it. If I had to offer anything negative I’d say the book is perhaps a little overlong but then my zeal to uncover the truth may have made it seem that way? Reader, I was impatient! At times I found what I thought were potential plot holes, they were not in fact, they were my 'reader pot holes'!

Many of the characters are hard to warm to and some you simply dislike. That’s not a fault it’s a necessity! I always find that enables the reader to be more objective about the relationships and events. Where you have multi narratives you have multi flawed narrators!! I think one of the hallmarks of a good psychological thriller is the flawed narrator and where you have several be prepared for some cerebral gymnastics.

There are elements here that many will relate to. Again I don’t wish to give away too much but suffice to say that what appears to be too good to be true probably is!! And if I can be bold enough to throw the corporate jargon of team building and bonding exercises into the mix that may give you a flavour of what’s contained within these covers. And if I also include a cryptic quote from the blurb, hopefully your appetites will be whetted!

The novel is true to its genre and won’t disappoint fans of the psychological thriller. Regrettably I’ve not read any of Colette McBeth’s previous work so I’m not sure how it compares with her previous novels. Guess there's only one way to find out. ;-)

Thank you so much to Headline Publishing for an advance copy of this book.