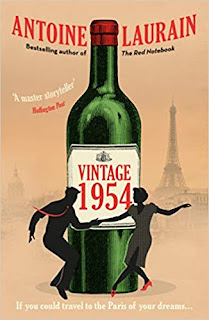 This was an hour or two of sheer delight. A novella that tells us a story with charm and imagination populated with thoroughly endearing and diverse people, with flaws and stories to tell, who instinctively seem to care about each other. It’s pure fiction yet told so realistically you do not have to suspend belief for a second.

I was reminded briefly of the Woody Allen film ‘Midnight in Paris’ especially where our characters meet the likes of Edith Piaf and Jean Gabin! It’s an homage to an age gone by in the city of cities!! Paris! La Giacondo and Tour Eiffel! Les Halles and Pigalle! If you’ve been there you’ll be reminded of its quirky, hypnotic, romantic ambience and if you haven’t, well, you’ll be wanting to book your trip once you’ve put this book down.

If you’ve a fascination with time travel this is the book for you! The science is probably there for the die hard realists but I found myself not caring because the story was so enchanting.

‘When Hubert Larnaudie invites some fellow residents of his Parisian apartment building to drink an exceptional bottle of 1954 Beaujolais, he has no idea of its special properties.

The following morning, Hubert finds himself waking up in 1950s Paris, as do antique restorer Magalie, mixologist Julien, and Airbnb tenant Bob from Milwaukee, who's on his first trip to Europe. After their initial shock, the city of Edith Piaf and An American in Paris begins to work its charm on them. The four delight in getting to know the French capital during this iconic period, whilst also playing with the possibilities that time travel allows.

But, ultimately, they need to work out how to get back to 2017, and time is of the essence…’

For all that much of the action takes place in 1954 the story stays in touch with our contemporary world and if there is a point to be made it is to highlight the paradox of the digital age we live in. The pros and the cons. In spite of the fact that I was not born into the digital age and I can well remember life pre social media etc I found it entertaining to be reminded of the alternate charm that life had when we actually spoke to one another and interacted in real time instead of digital time. But the book is not a moral tale. It’s optimistic and uplifting. I won't give away the details and nuances of the time travel part of the story, it's a joy to discover and there's nothing better than demanding a reader rummage around their imagination for a while. It's clever though and the final denouement becomes almost comedic.

The characters are all decent people so you warm to them and you care about them. Despite the fact that their paths have crossed only recently they seem to care about each other. I kept wondering what it was about this group of people that saw them meshing so well together and I think it was their lack of arrogance, no one person had a desire to control, there was no clash of egos, there was a mutual respect and harmony that gives the book such an upbeat feel.

The language is accessible and flowing, beautifully translated by Jane Aitken and Emily Boyce but we never lose sight of the fact that it is French and we are in Paris. The author's dry wit is not lost in translation either -  this quotation - 'A bar is an aquarium with its own ecosystem and particular species. Each fish is in its own same place and nothing ever changes!' And this observation regarding the nature of those  whose pleasure lay in the demon drink - 'They listed those who had fallen on Bacchus's battlefield like the soldiers named on the village war memorial, noting that the grape had claimed almost as many lives as enemy fire had done.'

Many thanks to Gallic Books for this little gem. My life is the richer for having read it.