The Assassin of Verona - Benet Brandreth 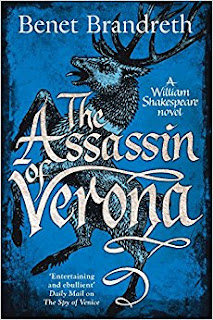 Whilst I struggle to put some books down when I’m reading I confess I did sometimes struggle to pick this one up!! I apologise if that sounds negative because ultimately I did enjoy the book and got a lot from reading it. Thanks to Bonnier Zaffre and Readers First for the opportunity to read it.

The author clearly is besotted with Shakespeare and if ever a book was testament to that then this is that book! There was much about the book I did get; The Shakespearian allusions, characters, quotes, locations - In fair Verona where we lay our scene.’  I love historical fiction although I’ll admit I’m more a Tudor, Plantagenet kinda girl! But I don’t shy away from other periods and I found this to be authentic and appears to be well researched. The plot itself was tight and exciting, like Dan Brown writing in umpteenth century Italy. The characters are convincing enough. But what I didn’t get, and it is bugging me, is the William Shakespeare character himself. I’m worried I’m being thick - uncharacteristically I might add ;-) . The part played by William was not dependent upon him being Shakespeare. Or so it seemed to me. The story would have held up just as well. Perhaps had I read The Spy of Venice it might be clear but the only conclusion I can arrive at is that this is an imaginative speculation as to how the Bard may have spent the so called ‘lost years’ of his life.

This is a witty, intelligent and erudite book of major appeal to scholars and lovers of Shakespeare who will delight and revel in the quotations and their placings with the narrative and chapter headings. I was quite proud of how many I did recognise. I referred earlier to my struggle to pick the book up and that was largely due to the concentration required to fully appreciate this well written text. The story itself is easily accessible but this is a book of language too and in order to fully enjoy that the words require a dissection almost to completely appreciate the skill of this writer.

I wonder, to a degree, whether this book is really aimed towards a niche audience of Shakespeare aficionados but forsooth, methinks there is much in this mighty tome to verily satisfy the many -  O, let my books be then the eloquence and dumb presages of my speaking breast.