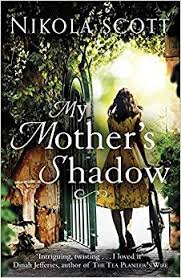 I sometimes think that debut novels occupy their own genre, whatever they may be about. There is something so distinctive about them. It’s what I like to call ‘debut novel exuberance syndrome’ and if that sounds like criticism it isn’t, or if it is it’s good criticism, not negative. It’s almost as if the debut novelist feels that they have debut readers and must spell everything out in the minutest possible detail. And so with this intriguing debut from Nikola Scott there is little left to the readers’ imagination everything is described and considered very fully and richly. There is the risk that some readers may be lost along the way but overall this is a story worth persevering with.

Firstly it has a twist I’ve not encountered before which certainly elevated it. Without that clever twist there was much that was predictable and contrived and could have grated but it didn’t fortunately. Secondly it is well written no matter that it is possibly too wordy. The novel has a dual narrative that gradually divulges the family mystery from 1958 to the present day. Without offering anything in the way of spoilers the book explores themes of grief, loss, identity, the mother/daughter relationship, secrets untold and the persistence of the human spirit to indefatigably seek the truth.

The main protagonists are well drawn characters. As their story unfolds we come to know them, particularly Elizabeth, and start to understand how they are who they are. You can’t help but warm to Addie and root for her; you want her to solve this mystery and understand all that’s gone before without her suffering any further emotional scathing.

The book is well structured and plotted so the reader is left satisfied at the end in terms of understanding what happened but it’s poignant. And so it should be. Maybe what happened shouldn’t have happened but it did, without it there would be no story and whilst this is a fictional work one cannot help but reflect on true life situations that maybe fuelled this tale.

I look forward to future works from Nikola Scott.

Thanks to Headline Review for a copy of this book.