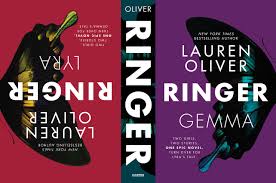 I read Lauren Oliver’s Delirium trilogy and loved it. I think it was the first time I became aware of dystopian fiction as a credible genre distinct from fantasy/futuristic and/or science fiction. So I was delighted to receive a copy of Ringer courtesy of Hodder & Stoughton.

I believe this is the second volume in the Replica series and whilst reading this made me hunger to read the first volume my enjoyment of these stories were not jeopardised by my not having read the first which I believe enjoys a similar format. These books are aimed at a YA audience but I don’t care! I’m old but I really enjoyed the book.

The ambitious presentation of the dual stories is eye catching and intriguing. Not to mention requiring a decision. Whose story do I read first? Gemma or Lyra. I chose Lyra. Why? Because the name annoyed me! I just kept thinking Philip Pullman and His Dark Materials Trilogy. However once I got into Lyra’s story the specific name didn’t seem to matter. I was reading about the person not the name.

Several times I was reminded of the recent Channel 4 series Humans. Some events seemed to have parallels with incidents in that show. The story was well paced and moved forward with the urgency experienced by the main protagonists, Lyra and Caelum. The mood created by dystopian fiction is tangible and for me I was experiencing similar feelings to those I feel when reading series like The Maze Runner series and the Divergent Trilogy not to mention The Hunger Games! The character of Lyra is convincingly drawn and believable. Her story is ultimately poignant. I did reach a point where all she said, no, THOUGHT, was “I love you. Goodbye.” and I found myself moved to tears.

Gemma’s story was fascinating. The divergent tales of both girls is very cleverly and meticulously done. In part it’s the same story told from two different perspectives but of course neither girls follow the same course of action. Yet they are entwined. That is not totally apparent until you’ve read both stories, i.e. finished the book. It’s very clever. The raw emotion is terrifying in many ways. The two male protagonists, Pete and Caelum, are also characters of substance. I am so loathe to give any spoilers but the whole novel is almost a treatise in humanity, what it is to actually be a human being.

Oliver’s prose style is economic without being insubstantial. Detail is there where its needed. This writer really understands her characters and cares about them and it’s a given, then, that the reader does too. Locations are palpably drawn and easy to visualise.

Ultimately I’m glad I read the Lyra story first for it seemed to help me make sense of Gemma’s story more easily. Also Gemma’s story seems to contain much of the morality, ethics and philosophy that renders this a cerebral work as well as a good old yarn. I loved the implications of the butterfly visual imagery in the book too.It is suggested that chapters from each story can be read alternately which I might like to try. I remember doing something similar with David Mitchell’s Cloud Atlas and it enhanced my enjoyment of that book. And to enhance my enjoyment of this book would be quite something!