A Jigsaw of Fire and Stars - Yaba Badoe 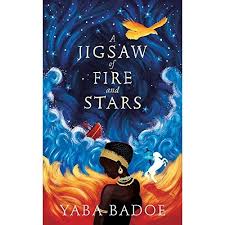 Considering the number of books I read and the years I’ve been reading, to acquire two books within weeks of each other that both have circuses featuring prominently is spooky to say the least. Since I don’t believe in coincidences there has to be some significance in this? First Jess Richards’ City of Circles and now this, Yaba Badoe’s A Jigsaw of Fire and Stars, the debut novel from this award winning film maker.

This is deemed to be a Children's’ Book on the back cover - 12+. This does not present a problem for me because I’ve spent my whole life trying to grow up and never quite succeeded! I am extremely comfortable with YA fiction. Sometimes though it is a fine line between what is considered appropriate for children and what isn’t. There are some adult themes here that not might be quite suitable for the younger end of the suggested age range. But there’s a good balance between fast paced action and some more cerebral scenes.

As I began to read I thought this might simply be a ‘Life of Pi’ for younger readers but there’s no Robert Parker disappearing into the jungle. (What did happen to that tiger? It STILL bothers me). It is very firmly in the genre of magical realism which can be a Marmite genre for both children and adults alike. I am one of those fortunate people whose head can go to myriad places with little or no suspension of belief and I feel that is essential for this book to be enjoyed.

It’s a very well written story told from Sante’s perspective the whole way through. Her history of being washed ashore in a chest full of treasure endears us to her immediately telling us that she is a survivor. There’s plenty of word pictures creating tangible atmospheres and giving us a feel of the nomadic existence this travelling circus follows. I believe that woven into the story too, although not specifically cited as such, is some Ghanian folk lore which offers an additional dimension.

At fourteen Sante has developed into a spiritual being able to communicate with ‘the unquiet dead’. And whilst that tantalising snippet from the blurb might hint of zombie apocalypse the book does not travel that path at all. It’s hard not to give too much away but some of these passages are very convincingly written. The book is for youngsters and there’s plenty of action and romance to keep a wide audience happy.  I thought the writer did get under the skin of her adolescent protagonists.

If there were to be an award for the best book cover of the year then this volume should surely be in the running. I am not normally interested in book covers, I prefer what’s inbetween them but this one is quite stunning. Of course you can’t tell a book from looking at the cover and cliched as that might be it does fit here.

I did enjoy this book but overall there was a patchiness; a balance between the magic and the real was not always achieved. It seemed that the intention was not realised with the depth it promised. Possibly there was an attempt to achieve too much in too short a book. But, wow, that cover!