Portrait of a Murderer - Anne Meredith 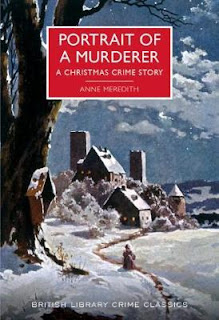 I confess that so keen was I to embroil myself in this fascinating tale that I skipped the introductions and went straight into ‘Portrait of a Murderer’. I will read them later, I promise, but for now I simply wanted the story to speak for itself. Subtitled ‘A Christmas Crime Story’ it doesn’t need to be  Christmas to enjoy it but what a great gift it would make. Thank you to British Library Publishing for recognising just that and offering this copy to me as an early Christmas present!!!

Books like these were written before the need to employ alternative devices and structures to the composition of a fiction, especially the crime and thriller genre, were commonplace. Multi narratives and chronologies, flawed narrators, ambiguous prologues were rare. But in this story you can begin to see the genesis of some of today’s accepted mechanisms of plot and narrative. All in all that renders this the work of a pioneering spirit!

The opening sentence sets the scene and its worth quoting here in full; ‘Adrian Gray was born in May 1862 and met his death through violence, at the hands of one of his own children, at Christmas 1931.’ No messing about. That’s the situation. Aha, the reader thinks, this book will be a ‘jolly’ Xmas whodunnit. Not so.The identity of the murderous child is revealed after about 50 pages in! Quite unexpected. And so what follows is, to quote the blurb, ‘a riveting portrait of the psychology of a murderer.’

Viewed in context what follows is an eloquently written and constructed novel where the writing and the actions flows flawlessly. The characters are well drawn and believable. The final denouement is satisfactory if not somewhat tragic and you’re left with that indefinable feeling that you have read an extremely good book.

Viewed within the contemporary climate of the crime/thriller genre it is, historically, a fascinating picture of 1930’s society offering us some insight into the protocols of behaviour and responses to said behaviours. The lack of forensic knowledge and equipment allow us to see how much more cerebral and observational crime solving had to be. Yet the writing seems to flow as freshly as if it had been written today.

It was wonderful to read; a good story and some writing of quality. What more can you ask?