So happy to be part of the Quercus Books social media tour for this already lauded debut novel.  And I'm going to begin with some blatant bragging.

I've got a signed proof of The Flatshare !! Who wants to touch me?! 😃 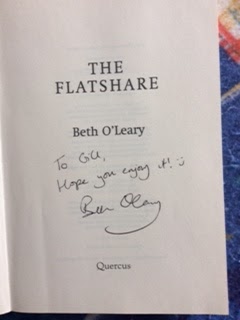 If we bring it all back to earth though I have to admit that I was so starstruck at meeting Beth that I barely spoke! Authors are like pop stars to me. Meeting them doesn't always bring out the best !! Thank you, Beth and sorry I didn't say more!! I was simply in awe! 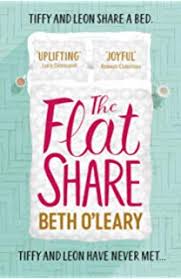 This is a much heralded debut novel, with several accolades under its belt already,  celebrating the ‘new’ ‘uplit’ genre. Is it new? For it seems to me that ‘uplit’ has much in common with romance/chick lit but it’s more gender resistant. Does it matter? No, not really, I guess. A feature of the genre is that you know there will be a happy ending. You know that you're probably going to feel good after reading it. There’s a sense of inevitability and predictability about stories of this type so it’s often not what is going to happen but how it happens.

Flatshare is a quirky tale with a unique and interesting premise. Two people sharing a flat, but not just the flat, the bed too! Plus they’ve never met! How does that work? Read the book!!!

For me, anyway, books of this ilk have to be extremely well written to sustain my interest and my enjoyment or I end up becoming quite dismissive and derisive. Well, was it, I hear you ask? Was it extremely well written? Was my interest sustained? Oh, you bet!! Hard to believe it’s a debut for the narrative fairly bounces along pulling you along with it as if you are hanging on to the tail of a kite. It’s a dual narrative seen from the differing perspectives of our heroine, Tiffy, and our hero, Leon. Two very different people and their characters are well sustained throughout the two narratives. You never stop believing in either of them. In fact the characters are all believable. Most of them are ‘niceies’ with a couple of ‘nasties’ who will have you hissing and booing in the aisles. Rightly so.

The plot goes that little bit beyond straightforward and ensures the reader keeps wondering. That’s another aspect of the romantic/chick lit fiction that has me yelling ‘Get on with it.” oft times because the plot is too simple and too obvious. But it isn't here at all. Although you’re fairly sure that everything is going to turn out okay in the end the plot is strong enough to sow a seed or two of doubt to keep hardened cynics like myself absorbed and desperately wondering and willing it all to be okay.

There’s some snappy dialogue and some witty one-liners. The dynamic between Tiffy and Leon is explored through post it notes initially which is so well done. Ooops! Is that a spoiler?

‘The flat is starting to look like a scene from A Beautiful Mind.’

‘…  I like the blue and white dress on the back of the door. Looks like the sort of one the Famous Five might wear for going on adventures.'

Whilst this is not intended as a work of social comment there is a subtlety in the sub text that wafts a few points and issues at you regarding justice, morality, manipulation, abusive relationships. The writer has a useful knowledge of the publishing industry which is put to good use here looking at office politics and dynamics.

It can sometimes be a drab world out there. There are some challenging people in it who seem intent on defying human decency sometimes. Whilst this is a work of fiction it IS uplifting to read of decent people doing decent things with little or no agendas. People behaving with compassion. What Leon does for one of his patients is above and beyond and is so heartwarming and screams positivity. It’s a contemporary story that I think will resonate with many but it doesn’t place contemporary above classic storytelling. It's about love and friendship and making the world a better place. It's about good and right prevailing.  I wonder if reading books like these can make us better people? Stop people in their tracks and make them think, 'Hey, I can do something decent today.....'.

There isn’t anything about this novel to not like. We read for many reasons. Often it is to be entertained, uplifted and ....‘uplit’! I can see this book being devoured by eager readers, the accolades will keep rolling in and I reckon it'll be the book to read this summer.

My thanks to Quercus Books for my proof copy and to Beth O’Leary for signing it!!

The bigger the book, the bigger the Social Media Tour! Check out everyone else contributing today to celebrate the publicity of The Flatshare. 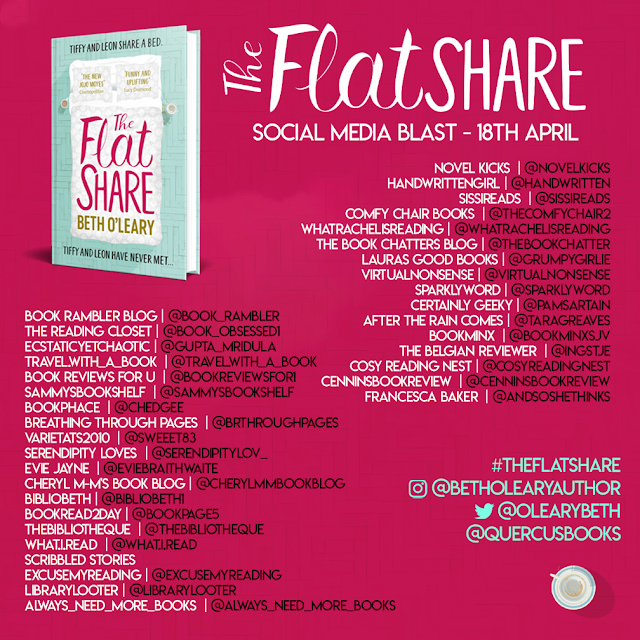