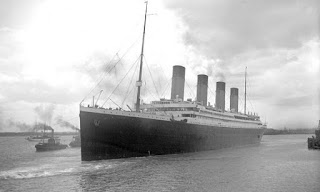 I became fascinated by Titanic and everything surrounding the ship and the ultimate tragedy way back in the 80s when Dr Robert Ballard discovered the wreck on the ocean bed. I watched a National Geographic video  of his mission and was absolutely fascinated by what I saw initially. (Years, years later I visited Woods Hole in Massachusetts where Ballard's expedition set off and is home to the Woods Hole Oceanographic Institution.)

That led me to seeking out more information and for quite a while I was almost obsessed and I read and watched everything I could relating to the ship.  Since this is supposed to be a book blog I am including a photo of some of the many books I have about the Titanic. 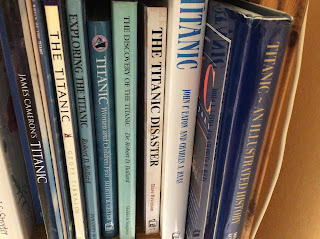 For a while I was like a walking  encyclopaedia. I could offer dates, names of survivors, what happened, when, where........  I soaked up anything I could find about the ship, the White Star line, the Belfast shipyards, the part that Liverpool played in the fitting out of the ship,  the ports that were visited, passenger lists. I left no stones unturned.

But the icing on the cake came in 1988 when through a series of synchronistic circumstances I met a Titanic survivor! Sadly she is no longer with us. Her name was Eva Hart.  She was about eight years old when the ship sunk and whilst she admitted that her childhood memories might not have been 100% reliable the impact of that tragedy was forever etched on her memory. And what she told me will never leave me.  Some of it was her memories; for years no one believed that the ship had broken in two when it sunk. Eva said she SAW it break in two from the lifeboat she was in. She was a kid, no one believed her, told her it wasn't possible! She said that none of the books told how the children were hauled up onto the decks of the rescue ship, the Carpathia. They were too small to climb the ladders like the adults so they were put into canvas bags and pulled up the side of the ship.  She said it was terrifying, almost more frightening than the tragedy itself. She told me that for years and years after the tragedy she could not bear looking at the sea. If she were anywhere near it she turned her head aside. She would turn her seat with its back to the water.

She believed very strongly that the whole tragedy should never be forgotten. She devoted much of her life talking to people about it. She felt lucky to have survived because her mother had a premonition that something was going to happen to the ship. So her mother slept during the day and sat up at night in the cabin, fully dressed. That's how she was able to get herself and Eva to the lifeboat. Eva's father perished in the tragedy.  So for her that wreck on the ocean bed is her father's grave. She was firmly opposed to anybody interfering with it or bringing any of the artefacts back to the surface. 'Let the 'Titanic' rest in peace as a memorial to the arrogance of man and his presumption of God.'

She signed one of my books for me. 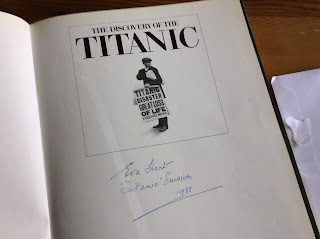 There is a book - Shadow of the Titanic by Ronald C Denney who was a friend of Eva's and wrote down her story. It's well worth a read for she attempts to put everything in context.

Thank you for reading.