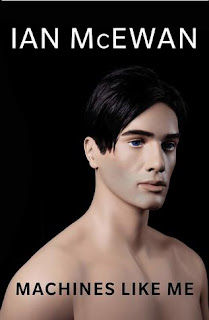 A new novel from Ian McEwan is always something of an event so I was excited to get my greedy little hands on a copy of his latest novel, Machines Like Me, from Nudge Books.

A fusion of subliminal futuristic technology unfolds alongside an alternate 1980’s London scenario where Britain has been defeated in the Falklands war and Alan Turing is still alive. Tantalising? Rather.

As the novel opens and introduces us to Adam, an artificial human and a main character in the book, a myriad of impressions flood the mind of the innocent reader, Lars and The Real Girl, Hal from 2001, A Space Odyssey, Channel 4’s Humans and Mary Shelley’s Frankenstein, all that we think we know about a created individual. I hesitate to use the word robot for it conjures a machine like object and Adam is chillingly human. Or is he? Much of his logic and thought processes seem consistent with the binary brain of a fastest computer, a chatbot with reasoning, sophisticated reasoning.

However Adam is not the only character in this story, Charlie Friend the narrator and his erstwhile neighbour, now current lover, Miranda accompany Adam. There’s something a tad feckless about Charlie who blows an inheritance on Adam, a limited edition synthetic human (female counterparts - Eve). And as it turns out, and is probably intended, Adam presents as the most interesting character by far. Miranda holds some secrets and the denouement of all offers us an absorbing story which is well written and exactingly plotted. I am loathe to say too much as I try to avoid spoilers.

But it wouldn’t be an Ian McEwan novel if that was all. For Machines Like Me poses some intriguing questions and considerations as to the nature of A.I. and, indeed, the nature of humans, too. As Charlie ponders, ‘How deep did personality go? A perfectly formed moral system should float free of any particular disposition. But could it?’  it becomes clear that Adam possesses not only morals but emotion too. Without wishing to divulge too much of the plot there was something of the Jules et Jim about events causing a comparison between Adam and a vibrator! I’ll say no more. ;-)

An especially effective device was the character of Alan Turing. How interesting to ponder how his particulate type of genius might have developed had he lived. Here we get a flavour of how McEwan perceives that. Turing’s opinions on artificial men and women pose food for thought. ‘We create a machine with intelligence and self-awareness and push it out into our imperfect world. Devised along generally rational lines, well disposed to others, such a mind soon finds itself in a hurricane of contradictions.’

If relationships have figured prominently in McEwan’s previous works it’s a theme that is continued here. Charlie and Miranda’s relationship is by no means straightforward even without the frisson of an android. The Adam and Eves have their difficulties, poignantly expressed by Turing ‘ I think the A-and-Es were ill equipped to understand human decision-making, the way our principles are warped in  the force field of our emotions, our peculiar biases, our self delusion and all the other well-charted defects of our cognition. Soon, these Adams and Eves were in despair. They couldn’t understand us, because we couldn’t understand ourselves.’ A fascinating point that throws doubt over our ability to ever construct functioning synthetics for if we do not understand ourselves how can we ever hope to create something else with understanding?

But Adam himself sees a more positive future for his kind, ‘It will happen. With improvements over time… we’ll surpass you …and outlast you ….even as we love you.’

It’s an entertaining book; some amusing moments, for example when Charlie is confused with Adam, some thought provoking and philosophical moments and some poignant moments. It’s not a book of action or thrills and spills, it wouldn’t work if it was. McEwan is master of his craft. It’s an absorbing read.