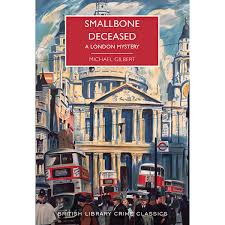 This novel couldn’t be more different to the last Michael Gilbert book I read - Death Has Deep Roots. And that delighted me because there’s nothing I enjoy more than some good old-fashioned diversity! There’s something so English and so dryly witty about this book that you wonder whether the writer is actually poking fun at the people he is writing about or perhaps the world of legal firms in general.

Without giving too much away a deed box in a legal firm of some repute is found to contain a corpse!! Highly original and highly unexpected! What follows is naturally the unravelling of the crime and the pursuit of the perpetrator, with some red herrings thrust in front of us to confound and confuse. In fact it is forty odd pages in before Smallbone is even referred to! As a reader you start muttering to yourself and wondering if there's a mistake in the title or the printing then you are hit with it!

The endearing Inspector Hazelrigg hones his analytical intuition to perfection as he narrows down the potential suspects, ably abetted by Inspector Plumptree, how perfect a name is that? And Sergeant Cockerill who gets all the good jobs! The investigations are also helped by one of the law firm’s newer recruits Henry Bohun. There were moments when I thought he was a bit of a shady character but I think I suspected everyone during the course of the novel.

I found some of the accounting figures bewildering but I think I got enough of the gist to understand what had transpired but I would say it is quite complex. Ingenious! But complicated. Plus I never guessed ‘whodunit’ ! Not even when the clues were right there under my nose. In the minutest of details even. It was cleverly done. And I love it when that happens!!

The characters are acutely observed, for example,  Mr.Birley - ‘Pedlar of words and a reduplicator of phrases.’ So apt. Even the names convey much of the character, Smallbone? He just couldn’t be called anything else! There are some pithy observations that remain pertinent even today, “With a Government like this one,” said Sergeant Cockerill,’you could expect a frost in August.”

If you’re a lover of modern crime I think it invaluable to read a Golden Age crime story such as this for it enables a reader to see how the genre has developed over the decades.

Oh, don’t forget to read Martin Edwards’ introduction. It's a wonderful prologue to the main story.

Heartfelt thanks to the British Library for  continuing to satiate my appetite for these wonderful examples of Golden Age crime writing.