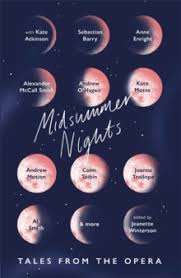 I’ve never been to the opera. I’ve listened to bits, usually the famous bits, and I’ve loved them. Going to the opera is on my bucket list. I want to go at least once. But one of the reasons I’ve never been is because I don’t want to go alone or with just anyone, I want to go with someone who is going to feel the way I do. And that’s hard because I don’t know how exactly I’m going to feel. But it might be like this -

‘Huge, frightening spaces opening up inside her, spaces she had not even known with there. Spaces filled up with notes, with music, with sound. Sometimes she stole glances at the grandmother to see what was happening to her, inside her, was obvious. She hoped it wasn’t.’  from Julie Myers’s The Growler

‘…. but I understood that I just heard something - ‘something different’ - that was radiantly beautiful.’

Also I worry that you’re supposed to wear a posh frock. I don’t do posh frocks. I look like a bad drag act so I leave well alone. And I also worry that if I go once I will get so utterly and completely hooked that nothing will ever be the same or enough……… again. But….. time’s running out.

In the meantime I’ve been reading this captivating short story collection edited by the supreme Jeannette Winterson. It’s in the manner of the Hogarth Shakespeare Project where well known writers were commissioned to reimagine some of Shakespeare’s work for a more contemporary audience. (Jeannette Winterson also contributed to that project.) An impressive collection of authors, including Ms. Winterson, have written short stories reimagining some of the tales from the greatest operas. The result is a stunning and wonderfully imaginative collection that stirs your heart and your mind with words in the same way that the musical notes of the opera do.

The salient difference between this collection and the Hogarth initiative is that there is an attempted  fusion of two art forms. Surely difficult to do? To conjure a story that exists musically and render it down to ‘mere’ words yet make it meaningful and moving is a tall order? It doesn’t seem that way from the work presented here.

Every reader will have their favourites. Mine?  I loved Ali Smith’s “Fidelio and Bess’ playing Beethoven and Gershwin alongside each other. Sublime!! Lynne Truss's String and Air which celebrates Britten’s Turn of the Screw which in turn celebrates Henry James was another. Kate Atkinson’s To Die For (La Traviata), Jeannette Winterson’s Goldfish Girl (Puccini’s La Fanciulla del West.) but wait…… I could end up listing nearly all the stories!!

Many writers were familiar to me so I found it interesting to look for hallmark aspects of their particular writing style. Some were new to me - Toby Litt’s The Ghost retelling Don Giovanni, Julie Myerson ’s The Growler and will motivate me to seek out more of their work.

I was ignorant of many of the opera stories. I’m not sure how opera lovers who are familiar with the stories will respond to this book? I found them engrossing and I had a sense that my desire to experience the operas themselves deepened.

The short story is an underrated genre in broader, commercial respects although I understand that sales figures are showing a healthy increase. It’s a shame for it is a very satisfying genre to read, and I should imagine, quite challenging to write for everything that a novel might contain has to be condensed without losing any of the impact.

This collection was originally compiled in 2009 to celebrate 75 years of Glyndebourne and riverrun have republished this year. Thanks to Ana McLaughlin at riverrun for a copy.