So pleased to be involved in the Social Blast for this amazing book. Please do check out the other amazing bloggers participating in the blast on Twitter and Instagram. 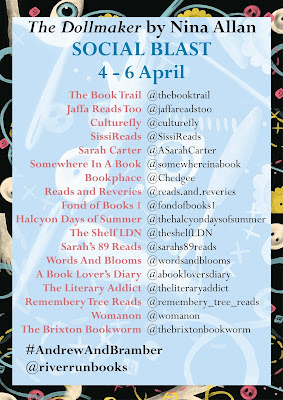 It seems a simple enough premise, two unique people with a common interest communicate and eventually meet. But that’s where the simplicity ends. The Dollmaker is as rich as the fabric the dolls within it are dressed in . Stylistically diverse; part epistolary, part short stories, as in stories within a story, and part straightforward first person narrative. The Dollmaker is an ingenious, genre defiant almost, love story for our times. The links between the various styles is a pleasure to read. Because of the short stories it feels like it has a cast of thousands but it hasn’t, it’s really two people, two damaged people - Andrew and Bramber and how they’ve spent the best part of their lives finding comfort in dolls but ultimately hope to find comfort in each other. For a reviewer, then, it could be seen as part nightmare, part challenge to do justice to this quirky, endearing tale without offering any spoilers but desperate to convey the subtle breadth of what is contained between its covers.

The sustained metaphor of the dolls and the dollmaker offers the reader that indefinable exhilaration some writers seem able to achieve when they deal with an issue from an almost sideways stance. For is this a novel about disability, physical or mental ? Being different? Looking at how perception can be distorted by misinterpretation of the physical being? The exploration of a relationship where two people can fall in love without actually meeting is not essentially new but here it seems to highlight how physical appearance can distort the inner beauty of an individual in this shallow world of ours. And ever present  - the dolls.

Bubbling subconsciously almost, especially in the short stories and Andrew’s story was the relationship between dolls and dwarfs, the identification of something close in size? Especially for Andrew. I found Andrew’s ‘troll dolls’ immensely moving for it was as if he was restoring all he could but acknowledging the remaining flaws as intrinsic to the doll, intrinsic to the person. I often felt there were points where the line between human and doll blurs “flawless lips in deep magenta, navy eyeliner, and almost-nude luminescent powder that made her spotless complexion gleam like pearls.”
Doll or person?

Andrew’s heartfelt musings upon the nature of his relationship with Bramber is so beautifully expressed in the following passage “And yet I did still have faith, in spite of everything. If ‘Artist was a chastening reminder of my limitations so was she also a -  talisman a symbol of all Bramber and  I had in common and my desire not only to be with her but to set her free.” Freeing ‘Artist’* seemed to me to be a metaphor for freeing Bramber. It is not unusual for somebody facing a burden, in Andrew’s case the burden of his size or lack of it, to become obsessed with something and then to become almost a savant as Andrew does with his devotion to dolls. But here the dolls seems to represent something deep, a recognition of his own self within the dolls he lovingly creates and mends. Is he trying to make himself more perfect, more acceptable? His conversations with “Artist’ give us clues as to his self perception and his fears, “Imagination comes with a burden as well as privileges. Solitude is one of those burdens. But is that so bad?”

Notions of the surrogate nature of dolls are subtly explored alongside almost fairy tale scenarios of the dashing prince freeing the damsel in distress but defying the stereotypical conventions of such roles. At times I thought of Pinnochio, not the Disney one, but Collodi’s marionette ‘doll’ desperate to become a real boy. And for Andrew I was reminded fleetingly of Oskar in Gunter Grass’s ’Tin Drum and for Bramber I thought of Thomas Mann’s ‘Magic Mountain’. The spirit of the fairy tale is never far. Ewa Chaplin, the link that is the catalyst for Andrew and Bramber’s association, is the author of Nine Modern Fairy Tales and we are treated to five as Andrew reads them on his journey. They are a delight and would hold up as short stories in their own right outside of this novel, yet they are crucial to the story as a whole, part allegory, with links in them from the fairy tale, doll, world, to the Andrew and Bramber, human world. 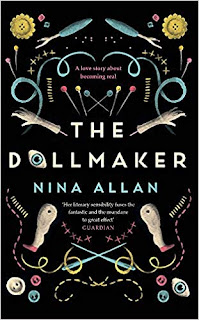 There were some metaphysical points to ponder, especially concerning time, Two lines from the book which prepare us for the curious timelessness and almost dreamlike passages of time passing that is indefinable and provoke the reader into wondering whether time matters? It IS intangible.

“I have always been in love with the idea of time”

“A clock is the only instrument specifically constructed for measuring a quantity that is intangible.”

And Bramber’s poignant and elegant musing on the passing of time.

“There is always a day when summer fades into autumn, sometimes in the space of a single hour. The light changes colour and the leaves soften, become fragile. Everything goes to seed. I was trying to ignore that moment, to pretend it isn’t happening, but I’m always aware of it. Every time it makes me wonder how many summers there are left.”

Also considerations of sanity and insanity? The concept of an institution ? Bramber is in a concrete institution but is Andrew in an abstract one from which his journey to Bramber is his escape? Bramber’s unfolding of the events that have brought her to be institutionalised  are told with such purity and honesty.

“The truth is, I’ve been over that night in my mind so many times I can no longer probably remember what really happened, if those details are details I can remember, or bits and pieces I picked up from what I found out afterwards.”

‘Ewa Chaplin wasn’t afraid to make dolls that weren’t comforting. She seemed to know that dolls are people just like us.” says the back cover, which pretty much sums it up.

And how many of us are broken dolls waiting for our Brambers and our Andrews?

*to define 'Artist' would be a spoiler. For now another character in the book. 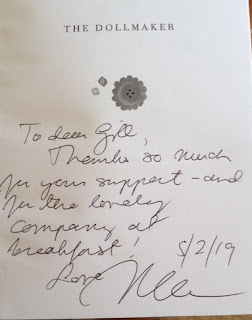 My thanks to Quercus books for both a proof copy of this unforgettable novel and the finished book. Also my thanks to Nina Allan, herself, for signing the proof for me. I’ll treasure it forever and our Dollmaker Breakfast where I got to talk with Nina about books and writing and Nina’s reading aloud from the book in the The Museum of Childhood.