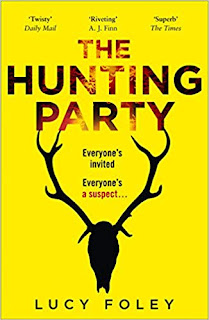 One of my ‘late to the party’ reads since the hardback was published about a year ago and the paperback was out several months ago, But I don’t care! If a book is good it stands the test of time. This cropped up so much on social media and seemed to meet with much approbation I decided I needed to read it. So I put in a reservation request at my local library to see if I agreed with the accolades.

It’s a decent little twist on a fairly classic murder scenario; the remote location with a finite suspect/victim list stranded by an unassailable situation, here it’s the weather, and an onion story where layer by layer the characters and their sorry stories are peeled back. You probably won't fail to think of Agatha Christie. There’s also something  of The Secret History about it with a group of friends and a death. So it’s not an original premise and I doubt the writer would disagree but it’s what a writer does with any premise, original or otherwise that makes or breaks a book.

A dual chronology of then and now and several POV from various female characters and one male character drive the narrative. I found that interesting because we don’t get every character’s take on the situation. None of them seem especially nice people, fairly vacuous and self absorbed. There are subtle and vague flashes of potentially redeeming qualities and as histories are revealed you sense some hope for a couple of them. Sometimes less than pleasant characters are criticised by readers who feel they can’t engage with them. However I have always believed that it permits the reader to look at the events with an objectivity which I think is helpful for a crime story. I thought it was an effective device in this book.

I also liked how the author kept the reader guessing as to who the victim was and therefore who the killer might be. Ms. Foley then led us all willingly into that labyrinth of red herrings and possibilities taking us to that point over and over again where we assuredly believe we know who dunnit and who had it ‘dun’ to them. But we’re wrong. Dammit! Oh, how I love that! When we smug, know it all readers are forced back to the drawing board. And we know, we just know because we’ve read so many crime and thriller stories that all the clues are there, hiding in broad daylight. There for the taking. But it’s only when we reach the final denouement that we start metaphorically pummelling ourselves for not seeing it! Naturally there are those readers who spotted it all right from the start! It’s a win/win situation!

It’s a book that satisfies the penchant for the flawed character, psychological thriller. It’s also interesting to see what a writer does when they ‘switch’ genres. I do see that as a brave move. But did the book deserve its social media accolades? Yes, and no! I enjoyed it and I wanted to read on to the conclusion. I could pick out inconsistencies in places, descriptions, details but what would be the point? I am not seeking perfection. I am seeking an entertaining read that keeps my attention. I got that. But if I’m honest there was a sense that I’d read it all before. And I’m on the fence as to whether that matters?
Posted by Bookphace at 16:38