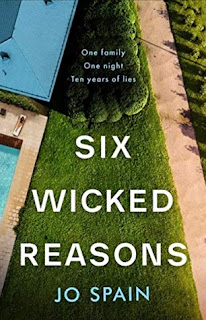 This is my third Jo Spain book now. Does that make me a fan? I’d like to think so. After Dirty Little Secrets last year I thought she might be hard pressed to come up with yet another page turner seemingly so soon. But she has. Again the number six is key. There were six neighbours in Dirty Little Secrets with six secrets and six reasons for murder and here in Six Wicked Reasons there are, well, six wicked reasons for……… nope, you won’t get me to go down the spoiler path.

The formula in this new book is similar to the previous one, but whilst that might sound critical it isn’t intended to be. Imagine your favourite chocolate bar? You can hear the tearing of the wrapper, the taste of that first glorious bite and the knowing that it will continue to taste as good until you’ve finished it. And the aftertaste, sweet and luxuriant. People return to their favourites  again and again and seldom get tired of eating them. Books and chocolate. You know what I’m saying?

This story uses the almost claustraphobic setting of Spanish Cove and the events of one night that allows a cascade of confessions and revelations concerning one family. A story that begins like a tightly wound ball of yarn and slowly unravels willing the reader to second guess yet making it harder and harder as the yarn startss to unravel faster and faster. You need to keep up. It’s like six plates spinning and you have to attend to all of them to really keep your grip on the story,

Ms. Spain is a plotter supreme, skilled and experienced, sometimes you feel that as a reader she is toying with you but she’s always one step ahead which is just as it should be. Guaranteed to make you want to read on and on but you’ll be sad when you reach the end for a part of you wants the experience to continue. Isn’t that what we want from a good book?

It might be a crime story but there’s also some insights;

‘She only realised, when Kathleen was gone, that her mother’s personality was rare, that she’d been a gem. It ruins you, a person like that loving you. Once you’d had that, it was devastating to realise nobody else would ever care for you in the same way. You would never be that important to anybody else.’

Each of the siblings has their story to tell, each of them has their flaws, not all of their own making. Their return is catalyst for tensions that explode. Words like narcissism, sociopath, dysfunctional, twisted, will creep through your consciousness as you read of this flawed family. And it all makes for such a complicated whodunnit you’ll not want to put the book down.

My thanks to Quercus Books for a proof of this gripping story.