This was part of blog tour for Nudge/New Books Magazine 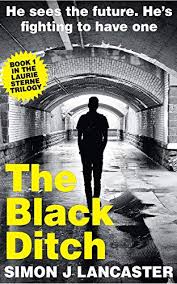 Offered as a dystopian novel showing a post climate change Britain, where London is a wall-less ghetto come prison for climate refugees and Birmingham has become the centre of government as sea levels rise, the opening sequences fulfil that promise and lure the reader in. The cover advises us that this is the first in a trilogy, (what self respecting dystopian novelist wouldn’t conceive of a trilogy - Hunger Games, Maze Runner , Delirium, Divergence - ;-) ? ) featuring Laurie Sterne so we know he and ourselves are in for the long haul.

However what follows is less than a dystopian novel than an action thriller featuring gangland wars in a bleak, unforgiving future metropolis. Dystopia is there but it’s a backdrop against which this bloody, violent and duplicitous adventure is played out. It’s a complex plot that requires the reader pay attention and keep track of the characters whose allegiances are sometimes confusing. The reader, like Laurie, is persuaded to believe one thing, but then, often painfully, the opposite is apparent.

Laurie, as a character, is what I like to call a ‘Houdini hero’. Against all the odds he summons envious strength to battle his oppressors and his many injuries to make it to the end of the novel. We know he will make it because this is but the first part of a trilogy but how is what absorbs us and requires us to suspend belief on occasions. You get to thinking that Laurie is some kind of paradoxical superhero but he doesn’t get changed in a phone box and he doesn’t wear his pants over his tights! No, his superpower is that he can see the future and see into minds. You might think that this would protect and support him, and it does to a degree, but, hey, we wouldn’t have a novel if he saw absolutely everything!

The depiction of London is cleverly done for it remains recognisable as the city we know today with the Tube trains and the areas and streets we might be familiar with but it is necessarily dark, dirty and sombre. There is little to uplift us. The city almost comes across as an additional character to thwart our hero’s intent.

Putting the action and the violence to one side you get to see that this is a fictional opinion of what might happen to our environmentally beleaguered world. As the first in a series I am keen to see these aspects developed in the future novels of this trilogy since it couldn’t be more relevant and pertinent.

Sometimes fiction is the perfect way to draw attention and raise a consciousness where drier, more turgid non-fiction tomes may lay dusty on the bookstore or library shelves. But if you take exception to blood and violence then this might not be the book for you but if you enjoy a fast paced, video game like action thriller with a point to make then you’ll devour this with turbo velocity.

It’s a debut novel and bears many of the hall marks of such a work, an exuberance of detail and an enthusiasm to offer an intense experience for the reader.

My thanks to New Books Magazine/Nudge for the opportunity to read this book and participate in the blog tour.