The Base of Reflections - AE Warren

This review was originally part of the nbmagazine.co.uk blog tour for Tomorrow's Ancestors.  I suppose I should've put the two reviews in the one post. But I figured each book really deserved a separate post.  And, it's my blog so I'll do what I want! 😉 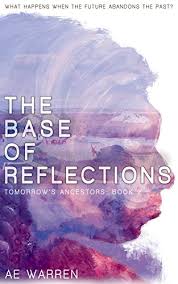 Oh, chortle, chortle, glee, glee, glee! Well readers, at the end of my review of The Museum of Second Chances I was bemoaning the fact that I had not signed up to participate in the blog tour for this second in this series. Thought I was being greedy, too many other books to review, blah, blah, blah. Then I read the first book. And I wanted, no, I NEEDED to know what happened next. So I mentioned this to the ever alert online managing director of New Books Magazine, Erin Britton,  who, bless her heart , secured me a copy of THIS, the second in the Tomorrow’s Ancestors series. May the Force Be With Me! And Erin, too.

It can be hard reviewing the second of a series when you’re reading it fairly hot on the heels of the first because it’s like a continuation of the first. And I’ll admit i was after nothing more than seeing what happened next. But that ain’t the stuff that reviews are made of. So it is interesting to see how well an author sustains firstly, the mood, secondly, a consistency in the narrative style and thirdly characters created in the first of the series. Characters need to be developed, I think, to keep a reader not just interested but rooting for them. New characters need to be introduced and new scenes set. (The main new location here reminded me of the Ewok settlement in The Return of the Jedi.The Force is with AE Warren, ;-) )

So as well as finding out what happened next, I have found out but I’m not going to tell you ;), I wanted to tick those boxes. And ask these questions. Was the first book a fluke? Is AE Warren the real deal?

Okay, so it was very much like reading a continuation of the first book, the writing style familiar now. I would think that to enjoy this book fully a reader does need to have read the first. However there are some ‘what happened previously’ moments that might fill the necessary gaps. The mood is typically dystopian and this book develops seamlessly from the first with no hiccups in mood. It’s action packed with some tense situations that felt more intense than the previous book. More exciting. Our established characters are all here and we learn more about all of them. Elise continues to prove herself as a worthy colleague of Katniss and Tris and you feel that the influence of dystopia and scifi worlds are never far away from the mind of this writer.

Unsurprisingly the premise remains the same, reversing extinction and preserving species creating a caste system of the world’s inhabitants who live in defined bases. The premise is sustained and developed and we get a more detailed glimpse into the minds of those who seek to perpetuate this hierarchical existence. Friendships and family loyalties are explored, moralities and behaviours, too, examined and left for the reader to ponder.

So, I hear you anxiously ask;

Did this tick all the boxes? Yes.
Was the first book a fluke? No.
Is AE Warren the real deal? Yes.