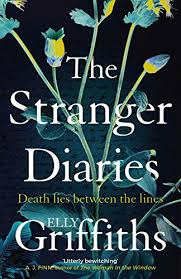 It’s eight years since I read an Elly Griffiths book! The last one was The Crossing Places, the first Ruth Galloway story. I finished it on 14th February 2010. There was no romantic association with the book I hasten to add, it just happened to be the date I finished it! But leaving such a gap in between books does enable a reader to sit back and be impressed at how a writer has progressed and developed in that time.

The Stranger Diaries is a corker!! You can play Crime Thriller Cluedo with it. Crime Thriller Cluedo? It’s where you think you’ve guessed the perpetrator. You’re convinced. You are so sure. You make the accusation out loud with a fist pump of triumph. Then something happens. And you’re so wrong you feel silly. But you move on. Again you’re doubly convinced you know who it is etc etc.  But you’re wrong. And so it continues until eventually you might surmise correctly and you win. Another fist pump. Or you fail miserably and the author wins. But that gets a fist pump from me too because I love it when a writer is that clever. So it’s actually a win-win!!  And I didn’t come close here until nearly the end. Bookphace 0 - Elly Griffiths 1.

It’s a perfect book for this time of year. The seasonal atmosphere enhances the ghostly aspects of the novel. The inclusion of a Gothic story from the past running parallel with the contemporary story is well sustained. The unease is perpetuated. There are some tense and spooky moments that have you looking over your shoulder form time to time.

As with many books of this genre it is hard to precis the plot adequately without giving too much away and offering spoilers which is probably one of the worst things I could do for this story!! So I’ll tread carefully. Clare Cassidy is a teacher of English and Creative writing. Her current post is in a school, the building of which used to be the home of a writer, R.M.Holland. Holland’s life poses some mysteries and unanswered questions that Clare is keen to research. The pivot on which the story spins is the death of one of Clare’s colleagues.

The story is structured into parts narrated by the various, female characters, or specifically, Clare herself, her daughter Georgie and the policewoman investigating, Harbinder. There are also extracts from Clare’s revealing diaries and the past story from R.M.Holland. Aside from the central mystery these women have their own stories to tell which are gradually unravelled as the story develops.  But we are hearing the whole thing from these people’s perspectives and inasmuch as we enjoy the mystery that unravels before us we also enjoy the human unravelling that the interplay between the characters provokes. In addition the novel is populated with some other well drawn characters many of who you end up suspecting at some time or another. As well as being functional they are also well drawn from Clare’s ex husband, Simon, to Harbinder’s colleague, Neil. The relationship between Clare and Harbinder is fascinating and well developed, very real. Harbinder is a gritty, edgy interesting character and I wanted to know her a little better. Another series, Elly?

The narrative is a comfortable, easy read, there’s no self indulgent deviations or attempts to overwrite or over complicate. It’s a solid plot and if there were any holes they have been so well filled as to be unnoticeable. It’s the work of a competent writer who strikes that all important balance between pleasing her readers and pleasing her characters!! And when it works it’s a pleasure to read.

I did smart slightly at the incorrect assumption of a teachers hours!! I never finished at 3 in all the years I taught. But I do realise it was one character’s opinion!!

My thanks to Quercus books and their Quercus2019 Best Seller event where I procured a copy of this entertaining thriller.