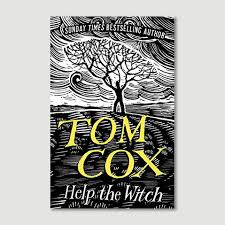 Tom Cox probably won’t realise how honoured he is that I read a copy of this book. Why, you may ask in bewildered surprise? The thing is I really don’t do ghosts or horror or spooky or witches. I have much too wild an imagination and from past experience with the genre the effects can be disconcerting. And this was billed as ghostly and supernatural. But there are some writers you make exceptions for and Tom Cox is one of them. As it happens I needn’t have worried. Yes, this is a book pertaining to ghosts and witchy type happenings but it’s not scary at all. It looks at it all from a positive perspective. It’s a book to entertain and make you think, sure, but Tom isn’t trying to creep the bejesus out of you, unsettle you a little maybe, it's certainly not without atmosphere. I enjoyed it very much.

This is Mr. Cox’s first foray into fiction and I’m sure and hope that it won’t be his last. I found it very interesting to see how a writer makes the transition from one form to another. And having read several of Tom’s other books I was familiar with his style and was pleased to see that his quirky, easy, sociable mode of expression was present in this collection of stories. It was unmistakably Tom Cox.

The short story is an underrated genre. And yet it’s a very satisfying one to read. Seldom are you left with a cliffhanger to deal with as the conclusion of one story allows you a pause or stopping point without reading that little bit too long into the night, before you begin another. Several of these stories end on an almost whimsical note leaving you wondering, not unsatisfied, but wondering. On his social media platforms Tom referenced the excellence of Annie Proulx in this genre and I think there’s evidence of her influence in this work.

The stories are diverse in theme and structure. Refreshing, as like Forrest Gumps’ ubiquitous box of chocolates you never knew what you were going to get other than a supernaturally, unexplainedly flavour with maybe a soft or a hard centre. There’s more than a passing celebration of the art of folk lore.

I see no point in detailing each individual story. I have my favourites, more on that later, but what did strike me was that running through them all was Tom Cox’s passion for the natural world , both flora and fauna, it’s infectious and can have you looking at things in a different way. If having read Tom’s previous books you think you might miss cats fear not you’ll find some here!! You’ll also find Tom’s wit and sense of humour present throughout.

My particular favourites were Just Good Friends and An Oral History of Margaret and the Village by Matthew and Five Others. I enjoyed the former as it was a well structured tale with empathic characters and the spiritual nuances were subtle becoming more obvious as the story gathered momentum. I’d like to quote this in full as it resonated with me -

‘Human character was more subject to geography than was generally acknowledged.Yet there was a pressure to be the same person people had come to expect everywhere you went . It was one of the small.untold difficulties of life.’

The latter reminds me, stylistically, of Bill Naughton’s The Goalkeeper’s Revenge and Other Stories, a book of short stories for children, i think it was the vernacular of the protagonist, very authentic and believable. I liked the fusion of past and present. I also liked the inferences posed in Seance about the nature of reincarnation.

Although perfect for this time of year and complimenting the season it can be enjoyed at any time. I also think it will stand up to re-reading too. Don’t be fooled by the apparent simplicity; it’s deceptive and there’s much beneath the surface to make you ponder.

Tom Cox is a paradox; he is unique as a person and a writer and I remember wistfully opining at the end of my review for 21st century Yokel - The world needs people like Tom Cox. If there were more Tom Coxs I doubt the world would be in such a mess’  but that wouldn’t work for if there were more Tom Cox’s this one Tom Cox wouldn’t have half the impact and the impact is what we need!!