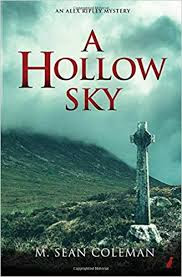 I read this second Alex Ripley mystery hot on the heels of The Cuckoo Wood and whilst I had firmly dispelled all visual images of Sigourney Weaver and visualised Alex Ripley, Miracle Detective,  in her own right I wonder if my response to the book would have been different had I left a longer gap between reading the two?

That’s not to say I didn’t enjoy A Hollow Sky for I did but the similarities in theme and characters were all too obvious. It seemed that each character in one book had their counterpart in the other almost. The setting was another village, this time in Wales and the antithesis of Kirkdale, from The Cuckoo Wood, in terms of the inhabitants’ demeanour. They were almost falling over themselves here to make Ripley welcome!

The basic premise is that some disgruntled, disappointed and devastated customers of a faith healing regime find their complaints are ……… unwelcome to put it mildly ! When the police are involved and one of the complainants contacts Alex Ripley a whole web of intrigue and missing persons are unravelled.

The scepticism towards faith healing and spiritual matters continues in this book.  I did wonder whether the author has an axe to grind toward the charlatans out there who do prey on the vulnerable. But sometimes I felt the balance needed to be redressed in favour of those people whose desire to help is genuine, whose belief is strong and who seek no remuneration whatsoever.

Where this novel does differ from the first is in the exposition of the main plot. Where The Cuckoo Wood allowed the mystery to unfold as secrets were discovered here we can see what’s going on to a degree but it’s not always clear who the real villains are and how they are operating . We know it can’t be Megan, who is the healer, because she is in a coma!!

The character of Ripley and her story is developed well in this second book and her situation at the end clearly indicates at least another Ripley mystery, (Hope you’re busy at work on it, Mr. Coleman!). Thus cementing our desire for the third story.

It’s a tidy piece of work, well plotted and structured, some hairy moments very visually written that made me think this might translate well to the screen. And there was enough to make me curious about what might happen to Ripley in the third book.

This review was originally part of the Nudge Books slot on the Blog Tour organised by Rachel's Random Resources. My thanks to both for the opportunity to participate.
Posted by Bookphace at 11:43