The Madonna of the Mountains - Elise Valmorbida 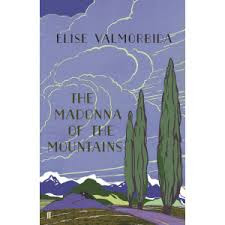 I was attracted to this book purely because of the title which reminded me of the Giovanni Bellini painting Madonna of the Meadow. Is that a good enough reason to choose a book? I don’t know. But I’m glad I did!

This novel tells the story of Maria starting from her pre war cusp of potential spinsterhood in the 1920’s through her ultimate marriage, WW2 and beyond to the 1950’s and tells of her struggles to keep herself and her family alive and well though adversities that go beyond the horror of war.

The story unfolds through Maria’s perspective and the author skilfully develops the character through younger naivety to an older wisdom. Maria dominates the narrative throughout but that’s not to say that the other characters do not impose themselves within the story - her husband Achille and her children, especially Primo, Amelia and Bruna. One might also say that Italy is a subliminal character in this book. The writer paints a wonderful picture of an almost idyllic pre war Italy. The atmosphere of the villages in the Veneto region of Italy is palpable. The frequent recourse to Italian phrases with their musical cadences only serve to emphasise the location. The descriptions of food, the ways of life, the sounds and smells of Italy are almost tangible.

The opening sections of the book have a gentle, lyrical feel to the language and the atmosphere that contrast effectively with the more urgent and tense sections later in the book. Whilst not an overtly political book it does offer an insight into the rise and progression of fascism in Italy under Mussolini’s rule and how it was for ordinary people at that time. There is a very real sense of a country disappearing under a yoke of impossibility.

It’s a genre defiant novel in many ways; it’s not a war story although WW2 plays a large part, it’s not a political novel although fascism imposes its unwelcome presence. In many ways it’s a love story; maternal love, filial love, familial love, patriotism, maybe it could be called  a family saga but it seemed to go beyond these somehow. The reader is encouraged to consider aspects of motherhood and being a woman in Italy during the decades covered by the book, dealing with expectations, aspirations and attitudes. There is no real criticism, like the characters who seem to accept their lot and devise coping strategies it’s as if the writer is saying this is how it was. this is what happened. There is a morality within the book which is where the titular Madonna plays her part. It’s an effective device and we learn much about Maria’s state of mind though the ‘Madonna monologues’.

There’s something slow and contemplative about the narrative. It isn’t a book of action even though plenty happens. The language is rich and vibrant like the country it is describing. There’s a paradoxical simplicity to the whole book for the events it describes are anything but simple but ultimately there’s a sense of calm and redemption as we reach the conclusion.

I thoroughly enjoyed it. I learnt a great deal about the production of silk! And I was left with a satisfaction of having vicariously enjoyed Italy in the earlier decades of the twentieth century.

My thanks to Nudge Books for the opportunity to read this elegant story.
Posted by Bookphace at 11:59