Delighted to be part of the Social Media Tour for this intriguing book. 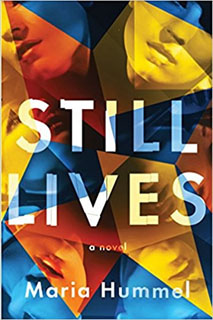 Although Maria Hummel is a new writer to me she has an impressive back catalogue that I hope to explore in the fullness of time. That would not be the case if I hadn’t really enjoyed Still Lives. It’s an LA chic thriller with plenty to keep the reader guessing. But unlike many thrillers it seemed to me that there was an attempt to dig a little deeper and say something about the nature of art and the perceptions of its patrons, taking place within that city of contradictions that is Los Angeles.

It’s a clever book. Purely by implication the book’s blurb urges its readers to follow a certain line of thought. But it’s not a line of thought that the characters of the book are privy to in the opening chapters. So the reader is empowered early on with this potential explosion of an event that almost guarantees a complete and utter absorption in all that follows. Impressive!!

As with most thrillers summaries of the action are a no go area if spoilers are to be avoided. So, briefly, Maggie Richter is our narrator, having followed in part the nebulous LA/Hollywood dream only to find it sometimes resembling a nightmare. Whilst viewing the construction of a parking garage she observes,
‘When this is finished, two hundred people will come every day to slide their cars into these spots, and I will never know a single person by name or what troubles them, and they will not know me, and if two hundred more take their place, I wont know that either.’
It’s as if she is seeing the car park as a metaphor for the city. She works at the Rocque Museum and the story begins on the eve of a pivotal, tantalising, new exhibition, Still Lives, embracing homicide as its theme, by a potentially controversial artist, Kim Lord. When the artist fails to show up for her own exhibition, a chain of events is set into motion

The tensions in the story are subtly maintained by a series of smaller incidents that build up into the crescendo that is the conclusion of the story. It’s not a hard hitting action packed thriller. The tensions and twists are implicit and cerebral, which can often elicit a subtler, more refined response in the reader. Ms. Hummel sustains the mood throughout the book, even at the end where Maggie is given to some introspection there remains the suggestion of something more around the corner.

There are numerous characters, the majority working in some capacity or other at the Museum, a deceptively homogenous bunch, whose personalities develop and unfold as the book progresses. All believable, all vulnerable, all under suspicion? Or not? I won’t say!!

The book has much to say about art and its ability to comment on life. The description of one of the exhibitions on capital punishment is quite chilling. That impact may be better realised by US readers but nevertheless it’s a powerful commentary. Another theme running alongside the thriller story is the place of women in the workplace and beyond. Inevitably now one thinks of the #metoo movement. There’s few direct allusions; again it’s implicit for the reader to extract should they wish to do so. There are many cultural references that help put the art scene into context, how it develops not just as a creative force but as an economic one as well.

The title’s ambiguity was delicious!! Just two words to make your reader think!! This device is used again with good effect later in the book causing Maggie to opine,
‘There’s something provocative about the message. It’s deliberately unclear. Like a work of art, it invites you to interpret it.’

Still Lives is an accomplished work from a competent author. An evenly paced narrative, descriptive without being flowery and chilling without being gratuitous, I can understand why this was a Reese Witherspoon Book Club choice. It deserves to be read.

(I learnt a new word too - ‘gallerina’! The Urban Dictionary defines it thus - The waif-like girls in opaque tights who rule the art galleries in Chelsea and other art districts. Like ballerinas, they are generally delicate-looking, coiffed, and can come off as cold.’)

My thanks to Ella Patel at Quercus Books for the opportunity to experience this exciting story and participate in the Social Media Tour.

Although I am the last slot on the tour do check out what other bloggers have had to say about this book. 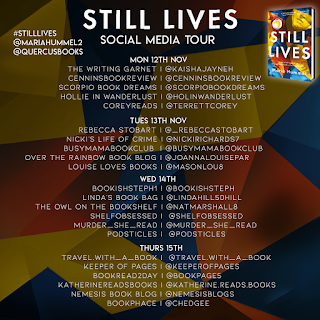