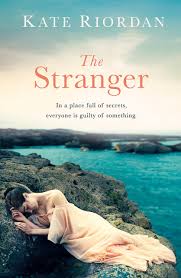 Kate Riordan has the auspicious honour of being the author of the first book I ever bought for my kindle. Almost the last too as I’m not a fan of the device. It was Birdcage Walk an historical novel which I enjoyed very much. But it was The Girl in the Photograph that cemented my affinity to Ms. Riordan’s style of writing and I’ve read pretty much all of her work since. She writes ‘big house’ books and she writes them very well.

The Stranger is an atmospheric novel with the same ‘flavour’ of her previous books. It was a delight to see how a writer develops their style and intent with each book they write. I had previously obliquely referred to Daphne Du Maurier in a review of The Girl in the Photograph I wrote (pre blog days to save you searching ;-))and I note that here the writer unashamedly acknowledges her affinity to that incredible writer (and Agatha Christie). This book, maybe more than any of the others, has a strong Du Maurier flavour. Maybe it’s the location, Du Maurier’s beloved Cornwall but I think it’s more.

The historical research, as ever, is authentic and detailed. You really feel you are in 1940’s Cornwall. Three Land Girls are at Penhallow Hall doing their bit for the wartime effort. Rose, Diana and Jane all dealing with their secrets and their demons. The occupants of the house, Eleanor and her ageing mother, have their secrets too. When all come together and when one damaged yet determined young lady is determined to open as many cans of worms as she can the results are explosive.

The setting is perfect and so well realised. The names, Breakheart Cove, Blackbottle Creek, so Cornish, so atmospheric and palpable. The war time setting adds an additional threat to the already menacing ambience. The characters solidly drawn. Diana Devlin, a veneer of abject unpleasantness and manipulation dictates her actions and it’s only when we delve below that outer covering we see some of the reasons. Rose, ostensibly a typical and average woman of her era but in possession of a wider intent as she takes her place at Penhallow. And Jane, plain maybe, her story less accessible until the reveals towards the end of the book although it is possible to reach the correct conclusion about her, all the clues are there.

Structurally the book begins with a beguiling prologue that hints, chillingly, of what is to come. Subsequent chapters take the form of Diana’s diary which enables the reader to catch a glimpse of this dysfunctional mind and some straightforward third person story telling narrative. There is a delicious twist towards the end, unexpected to say the least. And somehow the ghost of Daphne Du Maurier, and Rebecca maybe,  pervades it all.

The story flows, pleasingly, competently and was immensely satisfying to read. My thanks to Penguin for rewarding me with a copy of this book.