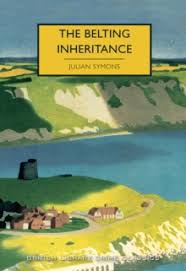 Belting by name and belting by nature! This was a delight from the first word to the last full stop. A wonderful gothic spider web of family secrets and intrigues that have you second guessing all the way through. It’s not a new premise, stranger returns claiming to be long lost relative but this 1964 exposition of the theme is extraordinarily well done.

Our protagonist is Christopher Barrington ‘adopted’ in a manner by the formidable Lady Wainwright mourning her two sons, casualties of WW2, although she has two other sons,Miles and Stephen who do not seem to provoke the same level of maternal solicitation that the lost two do! So when David,  one of the lost sons, appears to return the ailing Lady W. is required to reconsider her inheritance. And then a body is found…………

What follows is Christopher’s attempts to unravel the labyrinth of family secrets and to ascertain whether everyone is who they say they are. A quest which takes him to London, Brighton and Paris. It’s a well written, well plotted story for the most part. There’s a repleteness to the language and the pace which makes for a very satisfying read.

There are characters of varying intensity, Christopher maintains his dogged, youthful zeal in trying to solve the myriad questions that events throw up. Uncle Miles is a fount of light relief and his spoonerisms quite amusing not to mention his propensity to turn up everywhere! Everybody else fits somewhere inbetween!

Out of the blue I was reminded of Herges Adventures of Tin Tin. I think it was the sequences in Paris where characters kept popping up like the Thompson Twins do in the cartoon!! You could argue that this is a tad contrived but the book is so good that you forgive everything!

Astute readers will figure out several aspects of the final denouement without all the detail maybe but the writer does an admirable job of tying up all the ends. It’s a belting good read and another feather in the cap of the British Library.
Posted by Bookphace at 09:02