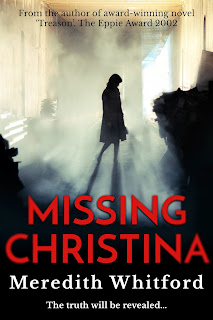 This review was originally part of a LoveBooksGroup blog tour for Nudge Books. The full blog tour article can be viewed here which does include the following review.


Meredith Whitford is a new name to me and my cursory impression was that this may be a ‘chic litty’ sort of tale but it wasn’t at all. It was an engrossing read spanning a couple of continents and several decades. Some injections of humour balanced out some of the more serious parts of the story. I thought the grief and bereavement aspects were well done. I think if you’ve lost a parent there’s much here that will resonate with you. There’s no attempt to sugar coat the emotional devastation.

I enjoyed how this writer struck a delicate balance between a deceptively light read and some pretty serious issues which was not evident at the beginning of the book. The opening pages introduce us to most of the main players which I found an effective device compared to many writers who allow their characters to develop through the progress of the story. Of course that does happen here as well to a degree but there is a sense of having got to know nearly everyone right from the start, especially Jacques the narrator, before the story proper takes off! I think without exception they all have baggage of one kind or another - issues that seem to resolve within the basic framework of Christina’s heart wrenching story.

It seems to be a book of balances; the contemporary world and a world gone by from the nineteen sixties and the author skilfully highlights the cultural differences of the age with references to things like email in one era and traveller cheques from another. Sensitive issues such as adoption and homosexuality are dealt with appropriately, compassionately and honestly.

There’s an intriguing family mystery which takes Jacques  from the UK to Australia and back again before he can finally unravel the web of secrecy and although some aspects are obvious the ends are conscientiously  tied up .

For those who argue that it is a tad far fetched it’s a work of fiction, a tale to immerse yourself in with some good writing, some entertainment and a little to make you think a bit. It’s over wordy maybe in places, but overall there’s less to object to and more to delight in.

It’s a perfect holiday/ weekend read. It demands just enough of you without being too draining on the emotions. I doubt I could have enjoyed it any more than I did even I had received it as a proper book rather than an e-book!
Posted by Bookphace at 10:00