The Colour of Murder - Julian Symons 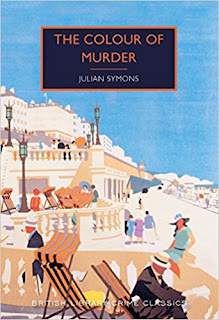 A simple enough premise. Unexceptional, unhappily married man crosses paths with a girl he finds irresistibly attractive. Almost obsessed his life spirals off course and he finds himself on trial for murder. First published in 1957 this novel falls into two parts - a monologue for psychiatric assessment, by the protagonists John Wilkins, and an intense trial in the court room. Dare I surmise that if such a tale were to be written today instead of two distinct parts the two would be interwoven with each other and both scenarios would unfold simultaneously?

However the structure works exceptionally well in this fifties piece of crime writing that had me absorbed from beginning to end. The first part where we hear of events from Wilkins perceptive I found myself reminded of Patricia Highsmith where you will the character not to behave in a certain way or make a certain decision because you know it will end in disaster. The second part is as tight a piece of court room writing as you’ll ever read and as such keeps you on your toes throughout. You don’t want to miss a comma let alone a word!!

It’s a marvellously solid plot, simple in its complexity. It couldn’t work today of course because forensics would ascertain some certainties straight away. In a way that's what makes it so delicious to read!! It also subtly raises questions about the very nature of justice itself.

The characters are almost without exception functional which I feel is a deliberate device because there is no need to engage with any of them sympathetically apart from maybe the murder victim, poor soul! Mr. Wilkins has an almost pathetic unpleasantness but never pathetic enough for us to feel especially sorry for him. The reader is allowed to remain objective; the psychiatric report is as factual as the trial proceedings. It’s a marvellously controlled piece of writing for I imagine it must be hard for a writer not to allow his characters to engage?

The final denouement is as unexpected as it is obvious, well almost obvious? There was always the possibility but it was so understated the reader can only doubt themselves.

Once again my thanks to the British Library for allowing me the privilege of reading this compelling tale. I’d like to say you’ve done it again, guys! But I think I’ve already said something along those lines in a previous review!  Oh, check out the cover, another retro travel poster beauty.
Posted by Bookphace at 09:12