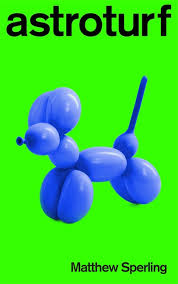 At the risk of sounding sexist and non pc I will admit that as I began to read this novella I feared I might lack the correct genitalia to fully appreciate its many nuances. As I read on I felt a little bewildered by the story. I wasn’t naive enough to believe it was a book about fake grass! But I was quite taken aback by the two main thrusts of the book - steroid use and astroturfing.

Without doubt it is well written with a sparkling wit, it’s concise and pithy. The language is economic but nothing is missed. It’s a fine example of salient writing. Characterisations, too, are finely tuned. The main character, Ned, not dysfunctional exactly but more than a little flawed. Not in the first flush of youth, he is in his thirties. he has a steady, if unexciting, job and is clearly dissatisfied with himself. So he begins to address his difficulties by using steroids to improve his physical self. This was a revelation to me and I found the book informative and comprehensive regarding the use of steroids by athletes. Not that I approve!!

Ned feels improved, physically and mentally, by his steroid use and seeks to improve his life further by developing a business around steroids. I don’t wish to give away anything but this is the astroturfing section of the book which I found to be a little dubious, morally.

I appreciate the frankness with which the story is told but found myself uneasy about the apparent lack of morality and illegality. I felt sure our lead character would get his come uppance at the end of the book. And I won’t spoil it by saying whether he did or didn’t!!

What the book did do was to make me consider how male and female perceptions of themselves can be destructive to a greater or lesser degree. We read so much of female difficulties; for example  eating disorders associated with poor self image but I hadn’t fully considered that men can suffer the same crisis of self that can lead them down the path that Ned took.

The book also confirmed my fear that the internet can be a murky,corrupt and dishonest place and the book shows how easy it is, with a modicum of expertise, to exploit that environment.

And I am still left a little bewildered. t’s a staggeringly contemporary novel, it’s for Now without a doubt. The cyber world shifts so quickly and insidiously that the astroturf of today will have morphed into something else by tomorrow. But I still have a final sense of ambiguity. Is this book a savage indictment of the times we live in? Or is it a well observed piece about the place of men in our modern world, the compulsive, addictive power of drugs to dominate lives? Or is it ‘just’ a story about one guy with an identity crisis and how he ‘overcomes’ it? And this is probably one of the cleverest aspects of this fiction for the ball is very much in the readers court! Make up your own minds, folks!

I’m glad I have read it for I feel better informed. I didn’t know what a sock puppet was before I read this! (Other than the obvious of course!! )

My thanks to Bookbridgr and Ana McLaughlin at Quercus and riverrun for the opportunity to read this tale.