Without a Word - Kate McQuaile 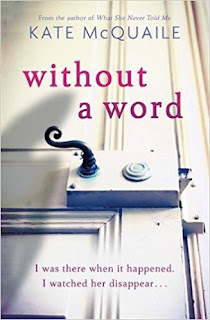 There seems to be an unspoken work at force for me that deems it mandatory for me to enjoy books written by authors whose Christian name is Kate! It’s uncanny. So when those good folks at Quercus Books sent me a copy to review I was delighted and confident that here was another Kate to add to my collection. I wasn’t disappointed.

Beginning with what seemed to be a random prologue, the point of which was not revealed until nearer the end of the book the story opened itself up and devoured me word by word. It isn’t a spoiler, as the cover blurb references it, but I found the premise original; two close friends enjoying a Skype call, one leaves to answer the door and is never seen again. The meat of the book is about the attempts to unravel that mystery ten years on. All the main characters seem to have baggage of various kinds and there are several subplots which mesh seamlessly with the main thrust of the narrative.

The stand out character for me was the detective Ned Moynihan who seemed the most real of all. I didn’t overly warm to Orla. She seemed an insubstantial person  and whilst I could sympathise with all she endured during the entire narrative, poor girl, it’s Ned who I could empathise with. The other main male characters I could not warm to at all.

As a thriller I thought it relied heavily on its unique premise to sustain it. Without that it might be just one more psychological thriller.  But it’s an accessible read, moving and flowing forwards to an expected conclusion except for one unexpected twist at the end which really had me!!  It enjoys all the elements you’d expect from a work of this genre. It’s pretty well written; maybe there are some contrivances, maybe there’s a situation or two that demands some elasticity in your belief and maybe there’s an over abundance of detail but none of these pose serious detriment to the story as a whole.

And it’s written by a Kate. Good enough for me!
Posted by Bookphace at 14:55