Somebody at the Door - Raymond Postgate 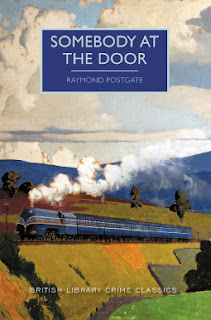 Scrumdiddlyumptious as the BFG would say. This book was pure pleasure to read. Another from the British Library Crime Classics series. This collection just grows and grows in strength and diversity. Let me also take time to celebrate the glorious cover art that could even render the series iconic in the fullness of time. I’m not normally bothered by covers averring that I read the book not the cover but here the covers are to be looked at as works of art almost.

This is a wonderfully written police procedural investigating the murder of a most unpleasant man. So that allows the reader to concern themselves with the unveiling of the perpetrator rather than wasting sympathies and empathies on Henry James Grayling himself. The construction of the narrative almost renders it a collection of short stories linked by a single train journey in one carriage. Person by person the police investigate the passengers and each of their lives are given full disclosure as we build up a picture of methods and motives. It seems that almost no one is exempt from suspicion. Each chapter heading shows the arrangement of passengers in the compartment with what must surely be the original emoticon! A pointing hand! It’s so simple yet so effective.

The murder method is ingenious and its detection all the more so given the lack of forensic and digital tools available during these war years. The bleakness and darkness of the war is sustained throughout so it’s anything but an uplifting book thematically but it was joyous to read such intelligent writing.

The characters are all well defined and accessible, human in their foibles including Inspector Holly and whilst the final denouement was not totally unexpected the ultimate dissection of that denouement was detailed and specific enough to satisfy.

I also think it is worth remembering that the state of contemporary crime and thriller fiction that we enjoy now would not have been arrived at were it not for the competence of writers such as these. This whole series is important in the entire history of crime writing,

If you haven’t read any yet, I urge you to do so and this one is a as good a place to start as any.
Posted by Bookphace at 13:21