In Dust and Ashes - Anne Holt 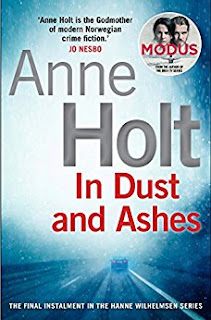 I’m familiar with Holt’s Vik and Stubo series but this is the first of the Hanne Wilhelmsen series I’ve read and although this may be the last in that collection it has whetted my appetite and I’d like to read the rest. Sometimes coming in at the end of something is a disadvantage and there were plenty of references to the past but rather than put me off it has made me curious to read the other titles. Plus none of the past detracted from the current investigations in this book.

The two detectives are quirky which does seem to be a prerequisite nowadays. But these two are a perfect foil for each other. I felt more warmth towards Henrik than I did Hanne but I think its the yin and yang of their personalities that makes for such compelling reading. The other characters do tend to be functional and hard to get to know with perhaps the exception of Jonas who you just wish everything could turn out okay for.

The plot is clever with a paradoxical simplicity within its complexity and the way the two, seemingly disparate cases, are seen to be linked is masterful writing. The unravelling of all the clues and facts made for fascinating reading and I end up envying the mind of someone who can make it all add up to one inescapable conclusion. I did feel, as the book snowballed towards its conclusion, that things were slotting into place almost too conveniently however there is something desirable about having all the ends tied up. The ultimate conclusion too is wonderfully redemptive after the plethora of sadnesses sprinkled throughout the two cases.

Credit, too, must go to the work of the translator Anne Bruce because there was not one occasion were I felt it was obviously a translation.
Posted by Bookphace at 15:40