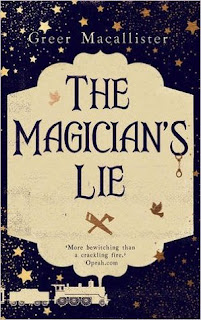 Although this book seems to have been originally published in 2015 I suspect that was the American edition and since the author is American it stands to reason. So we in the UK have had to wait a couple of years but some things are worth waiting for and this is definitely one of them!

I had not heard of Greer Mcallister before Nudge Books sent me a copy of this captivating tale. I approached it as one of those books where I had no expectations at all but ended up being utterly absorbed in this tale of magic and love and adventure and survival.

I’m beginning to be spooked by the number of books that have come my way recently with magic and travelling circuses in the theme, I think of Jess Richards City of Circles and A Jigsaw of Fire and Star by Yaba Badoe. It has to mean something but I’m darned if I know what!

Structurally this is what I like to call a story within a story narrative. The guts of the novel - The Amazing Arden’s life- is told by Arden whilst in custody for a murder that she may or may not have committed. And whilst that particular device may be seen as some as hackneyed it works wonderfully well here because it is also interspersed with the much lesser tale of Virgil Holt the policeman who arrests Arden. The dynamic between the two urges the story onwards until we are desperate to know what happens.

These two characters dominate and are well drawn, especially, Arden. But the novel is populated with other characters of strength and importance. Some of them drawn from real life. I had never heard of Adelaide Herrmann but she leaps off the page at you. If you’re going to include historical characters within your narrative then the research had better be good and this story flows with conviction and authenticity.

It is very well written; almost every word is crucial so as a reader you’re never lost within a sea of words wondering where the writer is going with them. I sometimes wonder if that is what renders a book ‘unputdownable’? For I was certainly reluctant to put this down and left other tasks untended in favour of immersing myself in this book. And if that isn’t a recommendation I don’t know what is!