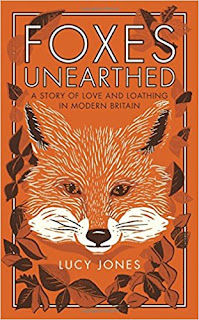 I generally select fiction to read by choice although I’m never averse to non fiction per se but often it has to be thrust upon me as was this illuminating volume by Lucy Jones. A volume about an animal I certainly always get a thrill from seeing, the fox.

This book seeks to investigate the history and lore of the fox and attempts to offer a balanced view from both pro and anti fox perspectives. I am very much pro and one thing the book did emphasise for me was how, as a species, man is the only animal to have the belief that domination and ownership of this planet is somehow exclusively theirs. I think the book also illustrates how fragile the entire eco system is and how man doesn’t really understand how intervention can disturb that fragile balance.

I was especially interested to read how foxes manage to interact and communicate with other animals including humans as I had a moving experience once where a fox came and asked me for help in broad daylight. He had injured his back leg and could barely walk. I will never forget his eyes as he looked into mine somehow knowing he could trust me. My cat also responded to his suffering and she sat a respectful  distance away from him, with no fear, but seeming to offer him some kind of moral support. The RSPCA came and collected him but he was too badly hurt and was euthanised. Apologies, I have digressed.

I found it a simple, gentle book. Not in terms of everything described certainly but at no point did the author attempt to preach at her reader. It is a compassionate, factual and observational overview with some pertinent research backed up by the informative notes and bibliography. The legal aspects regarding hunting are interesting as I was ignorant of the specifics. It is generally well written although it had the feel of a dissertation about it with the exception of the personal accounts of foxy matters.

I suspect it will appeal more to fox lovers than fox haters despite the writer’s very laudable attempt to be objective and non partisan. And one is left with an overwhelming admiration for this magnificent and oft maligned animal.

Thanks to Nudge Books who sent me this as a maverick choice to read and review. And I am the better informed because of it!