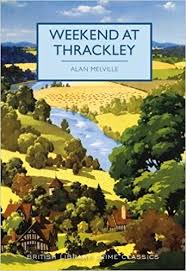 You’d think by now the British Library would be scraping the barrel with their crime classics? You’d start to think that they simply cannot come up with yet another gem of a story But they have! And gem couldn’t be a more appropriate way to describe this recent addition to the catalogue.

I absolutely loved this story from beginning to end. It’s almost perfect. I had this strange emotional deja vu of how I felt about reading when I was a child. That indefinable surge of delight that flows through you when you’re really enjoying a book. An insatiable desire to read to the end to see what happens and a stab of disappointment when it’s over.

What is about this book then that engenders such appeal? A tight, well constructed plot, okay there were some contrivances but they worked within the context of the setting and the atmosphere created.  A couple of plot holes which I forgave because the rest is so good. An array of well drawn characters, some goodies, some baddies and some inbetweenies. All clearly defined and behaving as you would expect them to behave and reacting as you would expect them to react, no, want them to behave and react. I think there’s a difference. A different kind of reader satisfaction. A satisfactory conclusion where everyone seems to get exactly what they deserve and all ends are tied up so you aren’t left hanging and wondering. The final denouement was a surprise! I’ll say no more. Wink.

The writing is well paced, economic, comedic sometimes, ‘you can bet your Sunday corsets….’  says one character to an aristocratic lady. We’re told all we need to know with as much or as little detail as we need. Something else I realised after finishing the book is that you completely forget it was written in 1934 the writing is so fresh and crisp. And when the telephone lines are cut, (is that a spoiler?) I didn’t immediately think about mobile devices. It didn’t cross my mind. Surely that’s an indication of how well written it is that you become so completely immersed in the story.

I think this would make one of those excellent TV period drama specials they someimes present at Christmas. It’s actually fun to imagine who’d you cast in the parts.

So, what are to doing  still reading this? Get yourself a copy. For the weekend maybe?