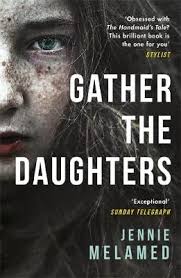 There have been comparisons of this book with The Handmaid’s Tale but, blessed be the fruit, this makes Gilead seem like DisneyLand! If you’re looking for an upbeat, uplifting jolly sort of tale then this tome is not for you. But if you enjoy bleak, dystopian, thought provoking fiction then read on.

This is a debut novel and enjoys what I like to call ‘debut novel exuberance syndrome’ where there is an uninhibited abundance of language and extended descriptions. It’s a chilling, harrowing tale with little or no redemption. It’s inconclusive leaving the reader to imagine what the outcomes may be.

This story takes misogyny and patriarchy to a whole new level. Quite a distressing level. For all that, it is a compelling, though, uncomfortable read. It poses a paradox for the reader. For how can I say I enjoyed it?!  And yet I was reluctant to put it down. I continually wanted to hope that these brave, courageous girls would ‘escape’.  The book was structured into seasonal parts beginning and ending with spring suggesting the inviolable,  cyclical nature of things.  The fiction is told from the perspectives of four of the girls on a cult defined island with no implied geographical location. It’s brutal and uncompromising. But the characterisation of the girls are extremely well drawn by this writer. If that were not so I think it might be impossible to read the book!! I really don’t wish to give anything away but the protocols to which these girls and women are subjected to defy belief almost. There were times when I couldn’t believe what I was reading! Yet I never felt that the book was wholly gratuitous. The quality of the writing saved it from that. It’s not graphic writing, more,understated implications.  The book demands its reader ask questions of themselves, of society, of religion. It demands we think. And as a character in the book observes whatever else happens no one can ever be prevented from thinking.

This is a marmite book without a doubt. There will be no middle ground. You’ll loathe it or laud it.
There were times when I did question the point of such a story. Is it a chilling indictment of where our world is headed? Or does it point us to the resilience of the human spirit in the face of seemingly insurmountable odds? The book raises more questions than it answers and poses much food for thought regarding the psychology of societies, cults and religions.

One thing is for sure, it won’t leave you for ages after you’ve finished it. But be prepared to be disturbed.
Posted by Bookphace at 16:26