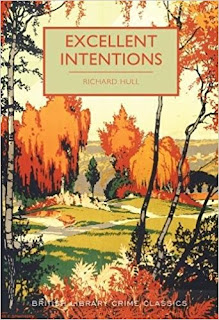 They say you can’t tell a book by looking at the cover. I’ve always been inclined to agree. But in this case I’d say, yes, you can. The British Library Crime Classics are very distinctive with their gorgeous covers that give you a good feeling before you even begin to read the book.

I’m not sure whether this title relates to the novel or the writer’s objectives! Nevertheless this latest offering from The British Library’s crime classics will have you scratching your head as you try to unravel just what has happened here.

Stereotypically chartered accountants have fuelled the ‘wit’ of many a comedian who have asserted the profession as boring. Richard Hull would seem to disprove this with his fine crime writing which is anything but boring. I’m glad I read The Murder of My Aunt before I read this for it allowed me to experience Hull’s deceptive subtle and witty style of writing. Possibly less immediately accessible than the former Excellent Intentions focuses on a courtroom perspective and the investigations of a Scotland Yard police Inspector who, lacking todays forensic tools and sophisticated autopsies must try to ascertain exactly what happened to the victim and ‘whodunnit’.

It’s an unusual and original way of delivering a crime fiction with a kind of dual narrative as we switch from courtroom to police. Somebody has been accused of the murder but tantalisingly we are never told exactly who it is from the handful of potential suspects encountered as Inspector Fenby goes about his meticulous investigation. Not until the latter stages of the novel anyway and by that time the list has been narrowed down and the discerning reader will conclude who stands in the dock.

The victim is a most unpleasant person which is crucial as our emotions are not wasted on him. Instead we focus our feelings on the rather pompous prosecution lawyer and the  more self effacing defence lawyer and the very business like Inspector. If I might quote from the book, Mr. Justice Smith says of the prosecuting counsel, ‘though he had taken a personal dislike to Anstruther Blayton’s rather pompous, fussy methods it had been a clear and convincing bit of work’. Perfect summation!

The plotting is clever and tight and the exposition detailed down to the last letter. The prosecution and the police enquiry dominate the narrative with less space given to the defence which, for me, made proceedings a little off balance but I could see why it had to be that way, there was little defence!

And of course no British Library Crime Classic would be complete without a foreword by Martin Edwards. I find myself looking forward to those as much as the novel itself!