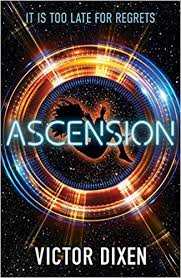 Well thank you very much Victor Dixen!!! How could you?! How could you leave us hanging like that!?? If you were hoping on the strength of that cliffhanger we might read the next Phobos novel you’d be right!! Bring it on! NOW!

Think Hunger Games, Maze Runner, Love Island, Big Brother, Divergent - all in Outer Space - and you’ll get the flavour of this first Phobos novel, Ascension. And in a sense there is nothing new here but it doesn’t seem to matter for what you have is a rip roaring, fast paced, dystopian YA sci fi novel from Hot Key books boasting ‘Friendship, Romance, Truth and Lies and The Stars’! If any of those are your bag there’s little to dislike about this story.

Heroes, heroines, and villains populate its pages. The reader is let in on the dreadful corruption of the huge conglomerate that is Atlas and the Gemini project whilst the participants of the spacecraft Cupido are not and hurtling though space in total blissful ignorance.

It’s translated from the French, Daniel Hahn has done a good job given the nuances of the French language compared to a clunkier English. Not surprisingly, Leonor, the heroine is French but ultimately nationality seems not to matter as the six girls and six boys travel through space heading for a new colony on Mars. All characters play their part and I believe the reader responds to them exactly how the writer intended! Clever. The scientific descriptions sound suitably baffling yet authentic and the narrative flows along pulling its reader through its universe desperate to see what happens. Although clearly aimed at the YA readership there’s plenty in it to keep an OA entertained. Well this OA was most definitely! However I may not have taken it as seriously as intended. I can see that there are some points of interest and debate. What they are I’m not going to divulge as I don’t do spoilers. It’s an easy, entertaining read that certainly made me wish I had the next volume ready and waiting!

Thanks Readers First for this opportunity.
Posted by Bookphace at 20:00