What Lies Within - Annabelle Thorpe 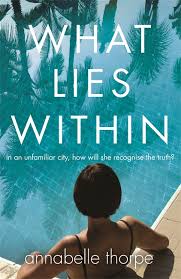 My earliest awareness of Marrakech was the Crosby, Stills and Nash song, Marrakesh Express’. At the time I thought that ‘striped djellabas’ were some kind of eastern lollipop, I was prone to confectionery fantasy at the time. Later it took on that mystical, gap year type of romantic location. Now, here, to set the record straight is Annabelle Thorpe’s new novel which conjures a place of paradoxes, intrigue and romance with a darker vein insidiously flowing through its streets.

Three friends from university, Hamad, Freya and Paul remain close even though their lives take them on divergent paths. A job proposition from Hamad brings Paul and Freya to Marrakech. There the past and the present unravel, but distinguishing between the truth and the lies are at the heart of What Lies Within.

The opening prologue infers a crime and indeed there is but it’s sub text almost and is cocooned inside the tapestry of deceptions and bewilderment endured primarily by Freya.  There are some delicious twists in this novel that try to push it towards the psychological thriller genre but it also examines relationships, friendships and the different depths that they can function in.

Of the three main characters Freya seems to behave with the most integrity, Paul with the least and Hamad somewhere in the middle. My feelings towards them mirrored that pyramid! Of the other characters some were functional, some were redolent of book characters from past times, almost but not quite stereotypical. But the mystique of living in a foreign country was sustained throughout for our ex pats and their interactions with those native to the region.

I found the book well written and well paced, slow to start, with scene setting and character building.
I enjoyed the way the book gathered momentum as the truths were exposed in alarming quantities. The ending was a little predictable but, realistically, where else could it go? To have left things hanging would have been cruel to the reader!! On the whole I found it to be a substantial and satisfying read. My thanks to Bookbridgr and Olivia Mead at Quercus books for the opportunity to read this riveting tale.