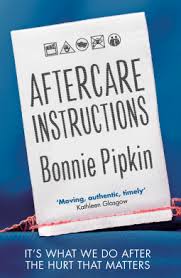 A sunny day, a garden chair, a new book by a writer unfamiliar to me - what better way to while away a spring afternoon. Plus I thank my lucky stars that despite being an Old Adult (who’s never quite grown up) I do enjoy fiction intended for the YA readership. The book in question is Bonnie Pipkin’s first novel and it would be disappointing if it was to be her last.

The premise could be viewed as contentious within the context of today’s sometime fractured society and the extreme views of many within it. For the story deals with teenage abortion. Not exactly a barrel of laughs you might be thinking and you’d be right but stories like these that deal with sensitive and emotional issues are important for highlighting more than one side to a challenging debate.

The main protagonist is Gen. The blurb insists on using the diminutive instead of her full name which I loved as it offered two interpretations which I saw as running parallel to the premise of the story in that there are two sides to most questions. You’ll have to read the book if you want to know her full Christian name because I’m not going to tell you! Gen seems to have had a lot to deal with in her seventeen years and finds a semblance of security and grounding in her relationship with Peter. However Peter abandons her at the Planned Parenthood Clinic which gives poor Gen something else to deal with. The novel shows us how she deals with her past and her present comes to accept who she is.

The narrative offers a first person account interspersed with a play script which fills in the details of Gen and Peter’s relationship.I thought this was a clever device especially as using dialogue as a descriptor allowed the reader to absorb the salient facts of the relationship without a load of unnecessary waffle. That can be a drawback in the debut novel where the writer feels they must throw everything they have at the reader. That trap is avoided . And again it’s a device that links in with something that happens to Gen further into the novel. I’m sorry but I just can’t tell you, I will not do a spoiler! That goes for the chapter headings too which I also enjoyed and thought were clever.

It’s a very accessible and easy to read book which can perhaps belie the power within it. Some strong characters populate its pages, always very necessary when you’re trying to appeal to the younger reader. And I think this should resonate well with that intended audience.  It is set in the United States where some systems and protocols differ from the UK.  I found myself fleetingly thinking of John Green and Louise Rennison, and The Perks of Being a Wallflower but it is a story that finds its own voice and transcends the geography, and my comparisons!

A laudable debut. Young Adults? You’re in for a treat. My thanks to Nudge Books for the opportunity to read this book.